This is a continuation of my previous Velocity Stage Race Report, you can read Part I here.

Heading into the second day of the Velocity Stage Race I actually felt fairly good.  Day 2 was just a crit, which for the uninitiated is a fast paced, 20-40 minute race that takes place on a circuit anywhere between 800m and about 3000m.  With such a small circuit, there are a lot of corners which means a lot of sprints and great opportunities for riders to attack.

Before the race I had the opportunity to share some friendly words with one of the riders from the Velocity Team in Edmonton who shared gave me some tips and made some jokes about us “bike racers”.  Stuff like that always helps to lighten the mood and remind you that we’re all here to have fun.  There were a few other guys who were warming up on their trainers, headphones in ears, with the eye of the tiger going on.  I was never really one for sitting on the trainer and warming up for half an hour, I definitely get the point of it but for me the fun is in riding the bike while its actually moving so I usually just ride around on the road to warm up before a race. 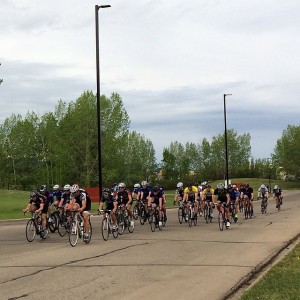 Anyways.  The key to racing crit is positioning.  So as the U17’s wrapped up I made sure I was poised to get a good position at the start.  Front row, inside line. Another little thing to remember when you’re starting out in crit, if there isn’t a neutral rolling start, which there probably won’t be, make sure that you’re half decent at clipping into your pedals.  If the racing starts off fast and furious and you’re busy swerving left and right to get clipped in you’re going to earn yourself a few scowls.

The whistle blew and we were off.  Straight out the gate myself and a few riders gave a good quick push, mostly to make sure that we got ourselves into the front group.  After the first couple corners it looked like our push may have resulted in a small breakaway group of about 10 guys but the peloton quickly drew us back in.  With 10 strong, organized riders, you can make a break stick, so I don’t think we were given much of a leash to make that happen.

I maintained good positioning through most of the race and when I found myself moving further back in the group I made sure I pushed up the outside to get back in the front.  My strategy on the day was just surviving the crit in one piece, a theme that was pretty consistent through the entire weekend.  I was actually sitting in sixth in the GC at that point so if I could just stay around where I was I would actually score a few points.

The mood at the front was actually pretty jovial and pretty chill.  We were pushing a good pace but no one was really killing themself.  I’m not sure how that translated towards the middle and back of the group, but I was pretty happy with this because it meant I could probably actually conserve some energy and try to break in the last couple laps.

In crit, one thing you’ll often hear is “hold your line” or “watch your line”.  Basically this means follow the person in front of you and don’t do anything stupid or erratic.  At one section in the circuit there was a 90 degree right hand turn immediately followed by a 90 degree left hand turn.  One guy who’d worked his way up to the front group definitely did not hold his line and just about caused a crash by not sweeping through the turn but rather trying to do what may as well have been a 3 point turn.  No idea what that dude was thinking.

Into the last lap I was well positioned in the front 5 riders.  That probably where you want to be if you want to contest the stage win so I was pretty happy with where I was.  As we came up to the consecutive right hand turns a rider came up to the front who I hadn’t seen the entire race.  I figured he was probably vying for position or trying to get away so I quickly hopped on his wheel and figured I’d ride him to the final corner.

Well as we hit the 90 degree right, he overshot the turn ever so slightly and tapped the breaks ever so softly.  Him overshooting the corner pushed me left, and tapping the breaks forced me further off the line.  At the same moment my rear wheel hit a crack in the road (think Edmonton roads) and I heard a loud crack.  F bomb.  This all happened in about a half second and I started wobbling on the bike.  For that moment I was 100% certain I was going down.  I had nowhere to go but the grass and I knew if I tried to stay on the road I would have caused a hardcore pileup, the kind that GIFs and YouTube videos are made of.   Not wanting to create a $25,000 piece of aluminium and carbon fiber modern art, off the road I went, and about 5 seconds was all it took for the entire peloton to sweep by.

In the moment I was pretty upset.  I cursed myself for not being more cautious and I don’t blame the guy in front of me one bit.  Its the rider in front’s responsibility to make sure he holds a steady line but everything happened so fast that it may even have been more my mistake than I remember.

I got back on the road, and finished the last lap of the race feeling pretty defeated.  I wasn’t in much of a hurry to finish, I sort of just sauntered back in about 30 seconds behind the main field.

After the race I inspected my wheel and saw clearly how deep I got into the crack and I’m actually surprised I didn’t go down completely.  There was a deep scratch up the tire and up the rim, so my wheel was about 4cm deep into the crack in the road at about 40kph.  And that was my race.

I learned a pretty valuable lesson. Next time I crash, HTFU and keep effing riding.

The next day looking at the GC standings I learned a pretty valuable lesson. Next time I crash, HTFU and keep effing riding.  In spite of the incident I’d only dropped from 6th in the GC to 10th, but had I come in 7 seconds earlier I would have only fallen to 8th, and 8th would have meant points (just AB Road Cup points, not upgrade points, but still).  Feeling sorry for yourself is nice and all when something goes sideways but its never going to get you anywhere.  In cycling, as in life, if you aren’t moving forwards, you’re moving backwards.

So the weekend wrapped up and all in all I am happy with my result.  I didn’t crash, I didn’t get dropped, and I proved to myself that I belong at least somewhere in the peloton and that I’m not quite as dismal at crit racing as I thought I may be.

My next race will be the Calgary Half Marathon on June 1, then I’m skipping the Pigeon Lake RR to get out to Highwood Pass before the roadway opens up.  Then after that its Banff Bikefest, then after that its Kananaskis K100.  We’ll see what July holds, but typically all physical activities are replaced by another enduro event, The Calgary Stampede.

Anyways, I’d like to thank my lovely wife Shirley for being the best fan ever, as well as my amazing friends Archie and Jessica who always come out to cheer me on in Edmonton and are my accommodations sponsors!  And of course Ridley’s Cycle, CycleOps Powertap, Powered by Chocolate Milk, and lululemon athletica for their continued and ongoing support.