Three years after racing the Velocity Stage Race for the first time, I was back at it again this weekend.  Going into the race, I had zero expectations and just a few important goals; first and foremost, my goal was to keep the rubber side of my bike down, my second goal was not to get spat out the back of the peloton in the Road Race and the Crit.  With the Calgary Half Marathon coming up the following weekend I really wasn’t tapering for Velocity or planning around it in my race schedule, just using it as a good confidence builder and learning experience.

The confidence builder and learning experience part were pretty important to me for this weekend.  I’ve always considered myself a cyclist before any other discipline, but having spent four years focused on triathlon, I’ve felt a little distant from my roots.  I recognize that in any sport, especially in the beginner ranks, considering yourself an “athlete” in that sport comes with certain expectations you place on yourself.  Going into Velocity once again, this was exactly the case.  For me, at this race I needed to stick with the group and do well enough to feel like I “belonged” once again.  In 2011 I got dropped hardcore in the RR and Crit at Velocity.  I wasn’t looking for a repeat performance.

The road race was the first event of the weekend.  For Cat 5 the Road Race was a 68km three loop course with relatively little elevation change.  The course, as with most of the Alberta prairies was fairly exposed to the wind.  During the neutral rolling start I got my bearings and just took the time to relax a little and get into a groove.  For the uninitiated, most road races feature a rolling start with the entire group setting off towards the start line at a comfortable pace.  As we passed the start line, the pace didn’t pick up too quickly and I worked my way towards the front where I knew a few other riders.

Tip:  In any big group of riders, the first 10-20 positions is where you want to be, its safer by virtue of the fact that there are fewer people who could go down in front of you, and chances are if something does go sideways (literally) you’ll have an escape route.

The first half of the race or so was pretty uneventful and I took a couple turns up front.  And with the exception of a few short surges coming out of the corners, and sections of the course into some knarly headwinds I was able to ride pretty well within myself.  We had one brave fellow who kept surging away from the peloton trying to make a solo break stick, but always ended up getting reeled back in, not because we insisted on pulling him back in but rather by the fact that 50 guys working even loosely together is invariably stronger than a solo breakaway.  If anyone deserves the combativity award, it was that guy, though I can’t help but think that if he saved all that energy for the final sprint he may have finished the day with a couple points.

The second half of the race saw a pretty large breakaway group with a pretty good cross section of teams in the break.  It slowly formed during a crosswind and headwind.  Honestly, up until we turned the final corner with about 4km to go I thought that they could stay away because the peloton wasn’t working that well together and most of the teams seemed content to let the guys from Cyclemeisters do the work to reel them in.

How to ride in a paceline.

As we turned the final corner however, guys from the main group vying for position started to move on up and the breakway and it was simply swallowed whole by the peloton in the last 1 or 2 kilometers.  One rider had soloed off the bunch way earlier and managed to win the day about a minute and a half up on the entire peloton.

Tip:  In cycling, teamwork is paramount. If you and your teammates want to up the race pace, you need to take turns working at the front in a paceline. Similarly, if you’re in a breakaway group and want to make it stick, then the other guys in the break are your best friends until the last kilometer.  Or if you’re simply out on a leisurely group ride with friends and are riding into a headwind, you’ll be much better served by taking turns working at the front for a minute or two, then rotating the front rider to the back, and so forth.  This is cycling 101.

At the end of the race I realized I was quite as regimented with my nutrition as I should have been.  I quickly realized this when my hamstrings cramped up like it was nobody’s business when I stopped pedalling.  I knew I should have had that banana Shirl told me about!  I ended up having to spend the next hour and a half stretching and hydrating for the time trial which was to start a few hours after the road race.

As a triathlete for the past few years I’ve had the opportunity to spend a lot of time on my TT bike, and typically triathletes make for relatively good time trialists. Their ability to hone in to a specific pace and stick there is very good and what they lack in top end power they can often make up for in having high threshold power.  Here, if anywhere I was looking to score points. 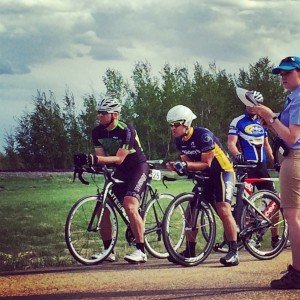 Tip:  In a typical TT, riders will set off in 30 second increments, and a commissionaire will hold your bike steady while you clip in to both pedals during the final countdown.  Make sure you’re in a gear that you can get moving on from a complete standstill when you start the TT.

The TT started off with a huge tailwind out of the west and it was pretty easy to get up to around 45 kph.  My target wattage was between 280 and 300 watts.  Having done the road race earlier in the day and just worked out some severe leg cramps, I figured I might be fighting to hold on to the lower end of my target range.  After a few minutes I was feeling good, hurting, but good.

About 1/4 of the way through the course the route turned southbound and I was able to reel in my first catch of the day.  At the half way mark we turned west into the headwind, and I just got small and focused on keeping my power steady into the 290’s, and I was able to catch my minute man.  At the final turn I caught my 1:30 man and powered through until the finish.

I finished the TT at just over 15 minutes for 10k having caught three riders so I felt very happy with my result.  I love time trials because its just you, the clock, and your bike.  If you do them right, you should feel great for the first minute or so and then be in a world of hurt for the remainder.  Shut up legs at its best.

By the end of Saturday I was sitting in about eighth place in the GC, much higher than I thought I would be.  Like I said, I finished the Road Race with the peloton about 1:30 back of the stage winner, and in the end my TT was good for ninth spot, not as great as I’d hope for, but not bad either.  You get a huge range of talent in Cat 5 and I know there were some phenomenal riders out there.

Here’s a look at my Strava files for the RR and the TT, you can click on each to see all the juicy deets.  In part II of the Race Report I’ll talk about how the crit went and the overall result.