Long Term with the Trek Stache 7 29er Plus 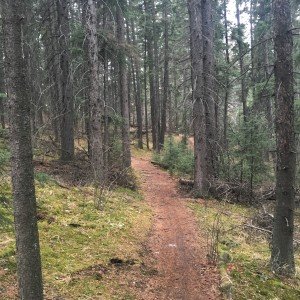 I’m going to level with you.  I ride road bikes.  Whether its road bike, TT bike, single speed, or whatever, I can ride it and I can give someone a pretty good sense as to whether the geometry is better suited for an endurance rider taking on their first charity ride, or a Cat 3 cyclist hunting down points on the local crit scene.

Mountain bikes on the other hand, are sort of a new area for me.  So I’ll give you a bit of background on why I went with the new Trek Stache 7 29er plus, my impressions on it after riding it for six months, and why I think its a pretty wicked ride.  If you’re looking for a more in depth review from folks who actually spend time shredding on mountain bikes, check out Pinkbike’s much more in depth review here.

With a few road bikes and a cyclocross bike in my quiver I finally thought it was about time that I get back into mountain.  I have no intention of getting rid of my Trek Emonda or Speed Concept anytime soon but last fall I felt the itch and decided I wanted something shiny and new.

As someone not riding super technical rocky or rooty trails I wanted a versatile platform that I could take onto local singletrack and maybe some fast and flowy cross country trails.  I’m pretty sold on the 29er wheel size but hadn’t really considered mid-fat bikes like the Stache but after reading some pretty positive reviews and knowing some local riders that had taken the Stache all the way out to the enduro scene, I figured I’d try something different and most importantly fun.

If there’s one thing that you’ll find about the Stache, its that its a wicked fun bike.  Trek went out of their way to make sure that the new 2016 Stache retained all the features about the previous generation Stache that people were stoked on, that being the bigger travel on the front end (110mm) and the super short chainstays.  Then they mixed in the one thing that makes the Stache a real head turner, crazy wide 29er, 3 inch wide Chupacubra tires.

What you end up with is a ride thats fast and flowy with more grip than you’ll find on just about any other bike on the market.  The bike obviously take a bit more effort to get up to speed than some a lot of 27.5 bikes out there, or much racier 29er XC bikes like the Trek Procaliber, but once you’re there, the bike flows and moves quite nicely.

Though the bike looks big (because of the massive tires), once you get on it, it feels proportional and more familiar than one might think by just looking at it.  In fact I found that my Trek Fuel Ex 8 has a slightly longer wheel base than the Stache for my size (17.5 inches) so negotiating switchbacks is never an issue.  My only suggestion if you’re used to riding and navigating between trees and tight spaces is that you may want to take a cm or two off of the handlebars.

Running such big tires means that with the Stache you’ll also be running a pretty low tire pressure, somewhere between 10 and 13psi is where I keep mine at.  This means that the bike soaks up a lot of the roots and trail feedback that you might get, making the bike feel a bit more like full suspension light, rather than a traditional hardtail.  Between the rollover capabilities that you get with a 29er and that extra absorption from the Chupacubra’s, I get why some reviewers and commenters from people who’ve actually ridden the bike say that the Stache can take place of a full suspension bike if what you’re used to riding is lighter trails, singletrack, and cross country riding.

To fatbike, or not to fatbike?  That is the question 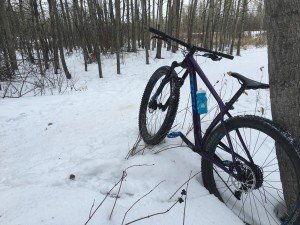 Being Canadian I’ve ridden the Stache 7 in just about every condition imaginable, including snow.  But let me be clear, the Stache definitely is not a fatbike.  That being said, it’ll handle packed, sticky, snow trails easily with the Chupacubra’s that come equipped with it.  One of the guys at Ridleys even went as far as studding the Chupacubra’s and basically made them stick to ice like velco.

But where you’ll want the width of a fatbike is on crunchy snow thats melted and refrozen, and on softer, more powedery trails.  So while the Trek Stache turns heads like its some sort of new, hybrid fatbike, its still not going to shred the pow like a Specialized Fatboy, or Trek Farley will.

There are a couple of other options in the Stache line up if you’re looking to rock 29er plus.  Specifically, theres’s the Stache 5, which has a rigid carbon front fork at $1999 CAD/$1680 USD (and a killer paint job), and the Stache 9 which gets you upgraded components, a better front end with an upgraded Manitou fork, and a dropper post, for $4500CAD/$3700USD.  The Stache 5 seems like a great option if you’re hitting a lot of nicely packed trails and want something to rip around in thats a little different and that’ll provide you with loads of fun.  Its not going to get you very far if you’re getting in to super technical trails and single track, but at sub $2k, its a cool option.

The Stache 9 is a pretty wicked bike as well (and the one that you’ll find no shortage of reviews on), but it also comes with a pretty steep price tag.  For that kind of dough you can buy a lot of bike in the full suspension market and I think that may steer some riders away from it, especially considering that Trek is still creating this new niche.  The big upgrade when going from the Stache 7 to the Stache 9 in my opinion is the addition of the dropper post, but you can save a couple bucks and grab a Giant Contact SL dropper for $200-$300 and route it internally on the Stache 7.  You’ll need to add a shim into the seat tube on the Stache to make that option work, but its not a bad way to go and I think its a perfect way to round out the Stache 7 package.

The Stache is a wicked fun, versatile platform ideal for riders looking to just get out and experience singletrack and cross country trails in a way that they haven’t really before.  I’d definitely recommend this bike to other riders looking to replace their existing hardtail or that find a full suspension to be a little too much bike for them.  For roadies or triathletes getting into mountain biking, I really like this bike as a single option for everything because chances are you won’t be spending too much of your spring/summer/fall riding season doing super technical trail or semi-DH riding.  The Stache is something different and I’m stoked to see it pushing something new into the hardtail scene which has been a little stagnant lately.

Reading the comments on forums and reviews, I know that this bike is a bit of a love it or loathe it rig.  To them I would have these few words, don’t dis it until you try it.  Honestly, the best bike for you is the one that fits you best and gets you most stoked about riding it.  And one look in person and one ride on Stache 5, Stache 7, or Stache 9, and I can tell you straight up that you’ll have a tough time not being more than a little intrigued by what the Trek Stache has to offer.