After putting nearly 1500km in the saddle on the Trek Emonda SL6 I’m finally getting around to writing a review of it.  Part of the reason its taken so long to write this review is because frankly, I’ve been too busy riding the SL6.  It’s an amazing bike and over the next few paragraphs, I’ll tell you why.

For those of you who aren’t familiar, Trek has segmented its road bike platforms into three model line ups, with the “Choose Your Weapon” tag to market the breadth of their product offering.  In short, the Madone is an aerodynamic race bred halo bike, the Domane is the endurance road bike born on the cobbles of Paris-Roubaix, and the Emonda is the featherweight climber at home on steep mountain pitches.

Spending a lot of time around bikes with the Ridleys crew in Calgary, I’ve actually got to say that I think that Trek has their marketing a little wrong here.   While they’ve touted Emonda as a climber, it really performs exceptionally as a traditional all round road bike.  Early reviews drew comparisons between the Emonda and the Cannondale SuperSix Evo, while other riders have compared it to the Trek Madone circa 2010 before it moved to the squared off kammtail aero frame design.  Drawing similarities with either of those two bikes places the Emonda in good company. 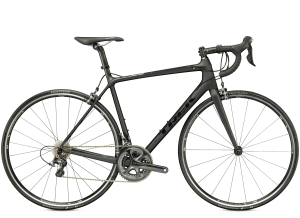 So what makes the Emonda so special?  First and foremost, when Trek set out to design the Emonda, they had the goal of building the lightest bikes available in every price category.  With the Emonda SL6, that means that at the sub $3700 CAD ($3100 USD) price point, they’ve manufactured a 16lb race bike kitted with Shimano Ultegra components through and through.  To make that possible, the SL6 uses the new 500 series OCLV carbon to create a frame weight of 1050g.

The biggest weight penalty on the bike comes from the Bontrager Race TLR wheels that tip the scales at just over 1700 grams, which is both a blessing and a curse. For around a grand there are a few sub 1500 gram wheelsets that will get your bike nearly down to the 15lb UCI weight limit.

The other feature that sets the Emonda apart from other bikes in the price category is the responsiveness of the frame.  From the first pedal stroke that you put into the frame you can just feel the bike drive forward.  The Emonda is an exceedingly efficient frame that transmits power effectively through the thick top tube and bottom bracket.  While the ride isn’t nearly as plush and compliant as the Domane which creates up to 20mm of travel through the isoSpeed decoupler, its still much smoother than any of the other bikes that I’ve spent time on in the past year (including the Cervelo S3 and S5, and Giant Propel and Avail).  Uphill accelerations and climbs are smooth and encourage the rider to power upwards.

I’ve subjected my Emonda to the perils of just one crit race this season and thought the bike performed exceptionally well.  Leaning deep into the corners the bike felt well planted and I felt confident counter steering the bike to whip around the turns.  Likewise, out of the saddle sprints felt direct and even with the stock Bontrager Race wheels the bike felt snappier than what I crit raced last season on, a Cervelo S5 with Zipp 404’s. 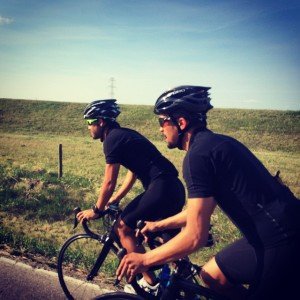 The Emonda SL6 is equipped with Shimano Ultegra 6800 components and a compact 50-34 crank. As I have mentioned in previous posts, I much prefer Shimano road sets to SRAM or even Campy (though my time on Campognolo bikes is fairly limited).   Shifting on the bike feels precise and mechanical, and in 1500km I’ve yet to have any dropped chains or missed shifts. On components, both Shimano and Trek deserve top marks.

Trek has done well lately to fully equip a lot of the bikes in their model line ups with full groupsets of each line. Rather than save some money by doing things like putting a 105 front derailleur and calipers on with an Ultegra bike, what you get with most of the lineup is the same grouppo through and through.

I switched to the Emonda from an Ultegra Di2 equipped Cervelo S5. Understandably, I was slightly hesitant to go back to mechanical Ultegra components but having ridden the Ultegra 6800 groupset earlier this year on an S3 in Nevada I knew that it wasn’t necessarily a downgrade.

So how do I like being back on mechanical rather than electronic shifting? I honestly don’t miss Di2 at all. That’s certainly not to say one is better than the other but from 105 through to Dura-Ace, Shimano’s latest work is clean and crisp. Going to Di2 on either Dura-Ace or Ultegra doesn’t necessarily mean an improvement in performance, you just get a very different feel. What I don’t love about Di2 is that it provides very little tactile feedback and as a rider you’ll be acutely aware that you’re pushing a button that tells a computer to makes the shift happen. You don’t actually feel like you’re the one shifting the gears.

Today, both the Ultegra and Dura-Ace mechanical groups provide trim adjustment on the front derailleur allowing you to minimize chain rub on cross-chained gear selections, a feature carried over from Di2. Its very useful, especially if you’re one who would rather keep the chain on the big ring on climbs rather than dropping to the 34.

I don’t usually talk about a bike’s contact points when I write reviews but I thought it would be worth noting here.

The Emonda is equipped with a thin, traditional road bar that some riders have said is a little too narrow. I don’t really share that sentiment and actually think that the road bars are perfectly sized to the frame sizes. At least in my case, I found the bars felt compact but not uncomfortably so.

The Trek Domane is equipped with a much beefier road bar with a thicker top section to increase the surface area where the rider’s palms rest. This may have worked well on the Emonda for climbers who prefer to ride in a very upright position, but realistically, most of the ride isn’t really spent with your hands on either side of the stem so I don’t see this as something that Trek got wrong. That being said, different riders have different preferences.

I wasn’t particularly enamored with the saddle that comes equipped on the Emonda, the Bontrager Paradigm RL. After about an hour and a half into each ride I found that it felt a bit too firm and my sit bones would start to get pretty sore. The Paradigm has a cutout down the middle which is a popular design these days that is meant to reduce pressure on soft tissue “down there”. But the benefits of the cutout simply didn’t make up for how uncomfortable the saddle inevitably felt.

I switched the saddle out for the Bontrager Serrano which is a much more traditional/classic looking saddle and haven’t looked back. 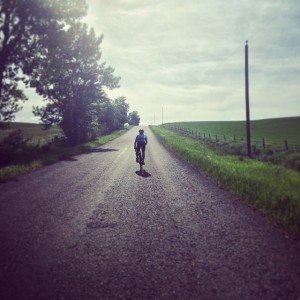 Get this bike if…

If you’re looking for a traditional looking road bike that can do it all, definitely consider the Emonda. I can’t help but think that this bike will be a classic in a few years and the guys I spend time with at Ridleys seem to agree. We all vote for our bikes with our own dollars and five of us have made the switch to the Emonda coming from Cervelo’s, BMC’s, and Giants.

The Emonda certainly isn’t an aero bike like the Madone, and the thick round downtube really owns the bike’s contempt for anything aero. But that the bike is so unapologetic in its traditional design is part of what makes it such a great performer.

Trek’s Domane was easily its best selling road bike last year. And compared to the Domane, the ride is definitely less supple, but not so much that you’d experience any fatigue at all after a few hours in the saddle. The gains from going to the lighter and slightly stiffer frame are definitely worth test riding first hand against the Domane.

Short of upgrading to the Trek Madone (and coming up with the requisite $7400 to do so), I don’t see any reason to get rid of this bike. It provides great ride quality and is punchy and responsive on climbs and in corners.

Of note, I considered the Emonda SL8 when I purchased this bike, but the $1300 price different to shave off a pound and graduate up to Dura-Ace just didn’t make sense for me. If you really want to upgrade this bike, sell the wheels for a couple hundred bucks put it towards some lightweight Eastons or custom built hoops from your local bike shop and you’ll have a 15lb thoroughbred race bike.

Post Script Mar 21, 2016.– I had the opportunity to spend about 7 hours on a Cannondale SuperSix Evo that I got my hands on in Maui for a climb up Mount Haleakala.  Comparisons between the Cannondale SuperSix Evo and the Trek Emonda are pretty fair.  Personally I’d give the edge to the Emonda as a bit of a snappier bike, and because it fits me better.  But my thoughts about the responsiveness of the Emonda over the SuperSix could easily have to do with the fact that the SuperSix I was riding was geared up with a saddle bag, frame mount pump, and a wider handlebar set than I’m used to on my Emonda (I don’t even ride with a saddle bag on my bike, I keep a tube and CO2 in my jersey pocket).  I know there are people out there cross shopping these bikes and I’d say between the Cannondale SuperSix Evo and Trek Emonda SL6, go with the bike that fits you better and you’re more stoked about the look of.  Its a coin toss between these two awesome machines so fit and style should be the decision maker.  Don’t go by what the interweb forums say, don’t even split hairs over weight, just go take these two bikes for a test ride at your local shop(s) and get the one that you’re more into. Period.