Just two weeks ago Trek unveiled the new version of Crockett, a purebred aluminium cyclocross bike thats capable of doing double duty as a gravel grinder and a racer.   The Crockett is the capable little brother of the Trek Boone, the cyclocross bike that’s been ridden by CX legends like Katie Compton and Sven Nys.

The timing was actually perfect for me as I’d been in the hunt for a new bike that could handle racing as a cyclocross bike, riding as a gravel grinder, and a travelling as road bike durable enough for me to pack up fly with and ride in places like Cuba or New Zealand.  Make no mistake, first and foremost the Crockett is designed for cross racing, but Trek definitely took steps to make it a more versatile platform in this latest iteration.

The biggest changes between the 2018 Crockett and the previous generation were; the addition of 15mm front and 12mm rear thru axles for additional stiffness through the hubs, additional clearance to run beefy tires as wide as 42mm for gnarly backcountry roads, direct mount disc brakes (cantilever brakes are no longer available on the Crockett) and a 150g lighter frame.  Perhaps the coolest thing that we’re seeing on the new Crockett is the addition of stranglehold rear dropouts, meaning the Crocektt is singlespeed ready straight off the rack.

So as soon as the Crockett was available (actually before it was even made public), I ordered the Crockett 7 and had it on its way to the shop.  I’ve only managed to put about a dozen hours into the bike right now, but here are my first thoughts, and the key variables that led me to my decision.

For me, mechanical discs were a non-starter and equipping the bike with SRAM Force shaves about a pound off of the bike. So the decision was pretty much made.  Personally I find that mechanical discs on road applications simply don’t yield sufficient benefit over rim brakes in terms of tactile feedback and modulation for me to warm to them at all. I’d used the TRP Spyre’s on the Giant TCX SLR 2 that I previously owned, and while they’re arguably the best road discs available, I still prefer the feel of Shimano Ultegra or even 105 rim brakes on conventional road applications.

So the Crockett 7 it was. 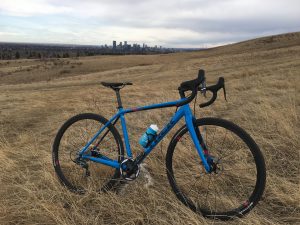 The Crockett shares its geometry with the race winning Boone, but what differentiates the Boone from the Crockett is the carbon frame and addition of Trek’s proprietary IsoSpeed decoupler, a setup that allows the top tube and seat tube to flex independently from one another, providing for a more supple ride.

I immediately found that I preferred the geometry of the Crockett to the Giant TCX SLR.  Sitting lower into the bike I’ve found that on fast and flowy singletrack I feel more planted into the bike as opposed to on top of the bike, which is characteristic of other cross frames that I’ve ridden.

An issue that comes up with cyclocross bikes that do double duty as road bikes or commuters is that the higher centre of gravity that the geometry of the bike creates in order to accommodate a larger triangle and higher bottom bracket can make the bike a little sketchy at higher speeds.  That’s a characteristic that you become acutely aware of at speeds over 50kph.  On the Crockett however you sit a little closer to the ground with more bottom bracket drop and a shorter seat tube than bikes like the Giant TCX SLR, so I certainly didn’t feel out of place or sketched out on the bike during higher speed descents out on the road.

The geometry of the Crockett is such that you never really feel out of place on the bike, regardless of terrain, whether its grassy trails, flowy singletrack, gravel roads, or plush pavement. Which leads me to my next point.

As I mentioned earlier, I landed on the Crockett after a search for a bike that could be my Swiss army knife for riding.

Specifically, I needed a bike that would be all of the following;

For all of the above reasons, the Crockett was a clear an obvious choice.

There were other bikes that I considered, like the Specialized Diverge and the Trek Domane S5 Disc, but the Specialized was a little too rich for the spec that I was looking for, and the both the Trek and Domane were too in to the gravel/road bike category to take onto the trails.

I also looked at the Giant TCX SX, and actually almost pulled the trigger on another Giant TCX SLR 1. But the TCX SX that is actually a steal for a carbon frame cross/gravel bike in the $2000 range, and the SLR 1 were both impossible to get availability on in my size. Giant’s exceptional value frequently means that actually getting your hands on a bike late in the season can be exceptionally difficult.

While I’m on the topic of Giant, the Giant TCX’s have curiously long top tubes, such that I’d ride a small in them while I ride a 52cm or 54cm road bike in any other brand. Part of why I’m not crazy about their geometry. 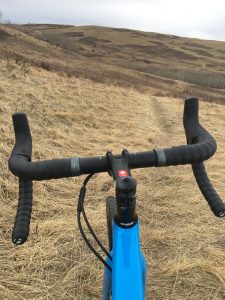 So far I’m loving the Crockett. I’ve put a few hours into it on quick and flowy grassy terrain, and a few hours into it on gravel and pavement running 32mm Bontrager RL tires. In either case the Crockett has been responsive and nimble in handling. And while it definitely lacks the snappiness of a carbon frame road bike or a Boone in pick up or acceleration, its an easy tradeoff to make given the ultimate versatility you gain with the an aluminium cross bike.

Out of the box the Crockett 7 comes with a 11-32 cassette and 40 tooth SRAM Force crank running as a 1x drivetrain. For the mix of applications that I need the bike for over the next month (road and gravel riding in Australia and New Zealand), I actually found that the 40 tooth ring wasn’t quite a big enough ring so I’ve swapped it out for a 44. The verdict is out for me as to whether I’ll swap it back when I get back to Calgary. 44 on a 1x is on the edge of too big for bigger climbs out on the trail, but its already pretty easy to spin out on the tarmac with it, which makes me question switching back to a 40t. I guess I can just get bigger quads…

Over the next couple weeks I’ll put the bike through a few more paces, and follow up to this review.