Review: Adventure with The Specialized Diverge and Giant AnyRoad.

The Specialized Diverge and Giant AnyRoad are the first in an exciting new category of road bikes. 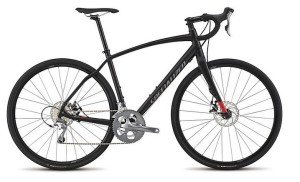 There’s a new breed of road bike out there that I believe deserves a little more attention and a lot more credit than consumers have given it.  These bikes are so new to the market that there isn’t really a name for them yet, some people call them adventure bikes while others call them gravel grinders.  The important thing is that they’re here, and hopefully for bicycling’s sake they’re here to stay.

The Giant AnyRoad and Specialized Diverge are two perfect examples of bikes that are meant to provide the rugged durability of a cyclocross bike with range and ride qualities of a road bike.  This makes them perfect for riders looking for a versatile ride platform for everything from gravel backroads, to urban riding, to long road rides, who up until now were using rides leaning closer to cyclocross bikes than road bikes.

A dedicated roadie putting between 5000 and 10,000 kilometers a year on their bike will have at least a few bikes sitting in the stable (I have four). They’ll have a lightweight carbon rig for pristine days and racing, an aluminium bike for crit racing and training days, a cyclocross bike to embrace misery like no other, and maybe a time trial bike for the cumulative 50 or 60 kilometers of time trialing they’ll do in a season.  And of course on top of those you can add whatever they have in the quiver for mountain biking.

Bikes like the Specialized Diverage and Giant AnyRoad are legit bikes that are made to go anywhere, and tackle adventure whether it’s on a beautiful stretch of open highway, or in the middle of no where on a gravel fire road where even your cell phone is useless.

There are a lot of great reasons to have six, or seven, or eight bikes, but there are probably a couple good reasons to just have one (personal finances, or maybe you live in a condo in the city, or maybe, just maybe, you have a spouse that thinks there are more reasonable ways to spend time and money), especially if you’re just getting into road biking, or you’re an urban commuter who’s dabbling in some weekend rides.

Enter bikes like the Specialized Diverge and the Giant AnyRoad. At first blush they look closer to a cycloross bike than a road bike, which for some shops has been a little bit of a hindrance towards leaning people towards considering them. But if you spend the time to really get to know these bikes, you might start to think that they’re as awesome as I do.

There are a few things that distinguish these adventure bikes from traditional road bikes, specifics include;

On the flip side, its important to note what makes these bikes so different from cyclocross bikes like the Giant TCX SLR, or urban drop bar bikes like the Trek Crossrip;

I mentioned geometry twice when talking about what distinguishes the bikes from road and cyclocross.  On the one hand, road bikes tend to have geometry and ride characteristics catering to confident and flexible riders spending at least a few hours a week in the saddle year round.  These riders can position themselves lower to the ground thanks to better hip flexibility to take advantage of the aero benefit of less upright positioning.  The Diverge and AnyRoad take a page from endurance road bikes with less race focused geometry like the Cervelo RS to create a better compromise between rider comfort and traditional road geometry.  This allows endurance, adventure, or intermediate riders to cover longer miles with greater comfort.

On the other hand, rider position is also one of the main reasons I tend to dissuade riders and urban riders or commuters who are looking for a versatile drop bar platform from choosing a thoroughbred cyclocross bike.  To help cyclocross riders tackle obstacles and throw their bikes over their shoulders in races, cyclocross bikes tend to have high bottom brackets (that part that the crank threads through) and big triangles (the triangle created by the seat tube, top tube, and downtube).  The result of this is that riders sit high on cyclocross bikes creating a sensation that the rider is “on top of the bike” whereas a road bike makes a rider feel like they are “inside of the bike”.  This translates into a handling characteristic that I can only describe as “sketchier and sketchier” as you pick up speed, especially on descents.

And then there’s the gearing.  Both the Specialized Diverge and Giant AnyRoad boast wide gear ratios that make the bikes ideal for road, gravel, and even entry-level cyclocross.  With super wide gear ratios and long cage rear derailleurs you’ll find more relief and bigger climbing gears with adventure bikes on long climbs than you’ll get with a typical standard equipped road bike.  In essence you have the same fast gears for hitting the pavement, and a couple more gears for steeper grades on pavement or loose off-road surfaces should you take the road less travelled.

On the flip side, cyclocross bikes have narrower gear ratios so that racers can always dial in on the perfect exact ratio.  The drawback to this is that while you have smaller steps between gears, you lose the top and bottom end of the gear range versus a road bike.  So you won’t be as fast on pavement, and on extendedgrades over 10% you’ll quickly run out of gears.  Bikes like the AnyRoad and Diverge solve this issue on the opposite end of the spectrum and offer a massive range of gears, but with bigger steps in between ratios.  Not a bad compromise.

Why this might be perfect first (or fifth) bike for you

Here’s the thing, its easy to walk in to a bike shop and look at bikes like the Giant AnyRoad and Specialized Diverge and assume that you (or your friend who is shopping for a road bike and brought you along) needs a “more traditional” road bike.  I’ve seen more than a few people who have dismissed adventure bikes because they look like cyclocross bikes, or because they look too entry level to ride.

The fact of the matter is that they do indeed offer more versatility than a traditional road bike while giving up reasonably little in the way of on-road performance.  We actually had a Specialized Diverge Carbon Di2 in the shop last August and with a Specialized FACT 10r carbon frame, S-Works crank, hydraulic disc brakes, and Roval wheels, it had a shop full of roadies thoroughly impressed by how it handled like a high end road bike (essentially because it is), but could chew through whatever crappy, dusty, dirty gravel miles we could throw at it.

If you don’t believe me, ask professional cyclist Taylor Phinney who put some serious miles in on his Diverge while he rode along in the Thereabouts Reprise with the Morton brothers from Boulder to Moab.  Bikes like the Specialized Diverage and Giant AnyRoad are legit bikes that are made to go anywhere, and tackle adventure whether it’s on a beautiful stretch of open highway, or in the middle of no where on a gravel fire road where even your cell phone is useless.

Can these bikes go where a roadie don’t take their carbon race rig and won’t tough out with their aluminum bike? Hell yeah. Are they able to spin up a 15% grade gravel logging road? For sure. Will they get you comfortably through your goal charity ride or Gran Fondo? Child please (yes).

And that’s why I like these bikes so much.  For the guy or girl who wants one bike to do everything from urban commuting to their first century ride, this bike actually makes sense.  And for a rider who already has a few bikes and wants another task specific arrow in their quiver, then this bike is the perfect gravel grinder.

Expect these bikes to be a hot ticket item over the next couple seasons. People still need to understand them and in 2015 the market wasn’t quite sure what to make of adventure bikes, but if you ask me, they’re pretty legit, and I’d be stoked to see a Diverge Carbon in my garage (well, condo).