So far so good. We landed in Sochi in the early hours Friday morning and were greeted by members of the COC. One of the first things that struck me upon landing was how pleasant and helpful the volunteers and workers were. Even our customs and immigration officer was polite and cordial.

Then yesterday we took the time to explore the area around the cruise ships and make our way to a nearby mall where spectator passes could be picked up and I could get a SIM card for my phone and maybe grab some food. I would call that our first sort of genuine interaction with Russians outside of the volunteers and staff who were working directly for the Russian Olympic Committee. The employees at the mall were so genuinely helpful and you could read the excitement on their faces at showcasing their new stores and welcoming visitors to their city.

Later in the day it was off to the Olympic park to watch the Opening Ceremonies at Canada House. Walking into the park along the way was amazing. The Venues look spectacular and the visuals are awe inspiring.

A lot of you probably saw from my Instagram or Twitter feed that Canada House is basically a giant living room for friends and family of Olympians, so I probably don’t need to recap that. But I’ll just say it was a blast and an incredible way to experience the opening event. Sitting alongside the proud parents of Canadian athletes was so cool and I was delighted to hear the stories of our Canadian Olympians.

A few other points on how things are going;

– the weather is warm! Everyone has their finest winter gear on, and you even see a lot of people (spectators and workers) walking around in snow pants and gear that I would reserve for the slopes. But it’s like 10-15C. I am not complaining though
– Police and security are everywhere and we do feel safe but are always alert and as always when travelling, it’s important to be aware of your surroundings. The Russians are also doing a superb job of moving people through security screening quickly and efficiently. No bottlenecks or long lines to get through screening thanks to several dozen scanners at each screening point
– it’s a lot of walking, but that’s like any Olympic Games. The venues are huge and since it’s all clustered together you basically walk between venues rather than take transit.

If I can leave everyone with one thought with this first post it’s this. When Vancouver 2010 opened up a lot of people in Canada and were waiting for things to go wrong. The flame didn’t erect properly, there was that awkward Wayne Gretzky on the back up a GMC in the rain with the Olympic torch thing, there was the fence around the flame, there was no snow, etc.

Give Russia a chance, focus on the athletes, and be open to the proud, kind, unique character of the Russian people. I am not naive to the fact that there are other people at these games who have had different experiences than me, nor am I oblivious to the many other serious issues surrounding the 2014 games and it’s host. But the Olympics are about the worlds finest athletes competing, they’re about settings side political differences in favour of fair competition for two weeks, and they’re about cheering for our family, our friends, our neighbours, and our fellow Canadians.

So if you’re going to have anything to do with the Olympics for the next two weeks, at least do that. Cheer for your country, cheer for Canada. #wearewinter.

Now, off to the Mountain Cluster! 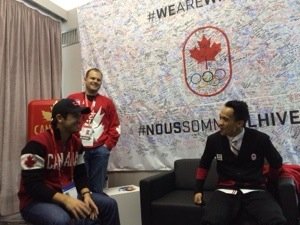 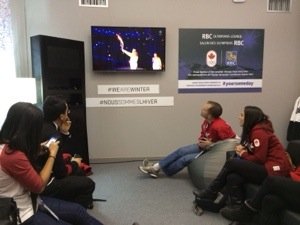