Sitting down with an Olympian: Gilmore Junio

So today I’m sitting down with my friend and first time Winter Olympian Gilmore Junio to give you all a chance to get to know one of Canada’s top contenders for a medal in Long Track Speed Skating.  Gilmore operates in beast mode every day as a long track speed skater representing Canada in the international arena, and will be racing in the men’s 500m and 1000m next week at the 2014 Winter Olympic Games.

I’ve had the opportunity to go on a couple rides in the summer with Gilmore, and he’s even been known come out to the Lululemon on 4th Street Run Club on occasion through the summer.  If there’s one thing that is clear about Gilmore, its that ain’t no one trick pony.  He’s an athlete of many talents and will certainly be one to look out for at his freshman Olympics this February.

Be sure to cheer for him on Monday and Wednesday in Sochi and wish him well on Twitter at @cdnhappygilmore with the hashtag #teamjunio! 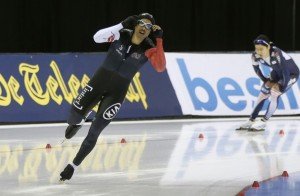 Raf:  Hey Gil, first of all, congrats on making the Canada Olympic Team.  I don’t think there was any doubt in our minds when we were all in the stands watching you at the qualifiers at the end of December, but we were all still holding our breath right up until you crossed the line and finished near the top.  So congrats!

Gil: Thanks! And thanks for coming out – it was awesome having you all in the stands cheering and being able to celebrate with you after. It was definitely nerve racking and I’m glad that part is over, now on to the fun part!

Raf:  Yep, now on to the fun part!  I want to hear more about life as an elite athlete, but we’ll start with some easy questions so everyone can get to know you a bit better.  Where were you born?

Gil: I’m one of the very few that are born and raised in Calgary but I love this city and I love calling it home.

Raf: What was your workout this morning?

Gil: Well with it being so close to the Olympics now we have more easy days than hard days as we taper down to help us feel rested and sharp come race time. So this morning was an easy technical day on the ice followed by some off-ice skating specific exercises.

Raf: Favourite music to train to and what’s was the last song played on your iPod?

Gil: This is a question I absolutely dread because I enjoy all types on music. My pre-race playlist consists of everything from electronic, rap, pop, rock and a little bit of T-Swift country. Turning it on right now though, the last song was… No Way by The Naked and Famous, a perfect song for the calm before the storm.

Raf:  Haha cool. Okay, who is your athlete idol?

Gil: Easy. Jarome Iginla. He was the heart and soul of the Flames for so many years and loved the way he played – the guy could do it all and he wore his heart on his sleeve.

Gil: Sugary cereals. Cinnamon Toast Crunch, Lucky Charms and Nesquick are my go to’s and there is nothing like starting the offseason with a box of those.

Raf:  If you weren’t an athlete, what would you be doing right now?

Raf:  What’s the typical day in the middle of your training cycle look like?

Gil: A typical day… so I’ll wake up around 7:15 am to leave my house at 8:15 so I can get to the Oval for 9. From there, we’ll get on the ice and do what we call speed development, so it’s a lot of sprints, starts and a lot of work on getting speed over the first 100 metres of the race. That session including warm-up and warm-down can be three hours long so after a workout like that it’s important to get in a recovery meal so soon as we can. Luckily for us, the Canadian Sport Institute set up Fuel for Gold, a athlete specific meal plan, in Mac Hall at the University so it’s a short walk away from the Oval. After lunch, we’ll get about 2-3 hours break and then head into the weight room for a pretty heavy weight session that can be an hour and a half to two hours long. That’s the end of the training day at least, after the day is over I’ll usually have dinner with some of my teammates up north and hang out for a bit before making the drive home to the south but doing that helps me skip rush hour traffic so that’s nice.

Raf:  So how did you get into long track speed skating and what was your background in sport growing up?

Gil: Well I started playing hockey when I was 7 but when I was 13 it was pretty apparent that I would not possess the size or strength to play hockey at the highest level. Fortunately, my dad saw an ad on TV for a speed skating talent identification camp at the Oval and although size and strength were not apart of my game, I was always a strong skater so my dad enrolled me in that and that’s how I began skating. I didn’t start long track speed skating until I was 19 – primarily growing up I was a short track speed skater but after I crashed and fractured two vertebrae in my back, my goal of representing Canada at the World Junior Championship was in serious jeopardy. Because of the injury I would miss the trials for that competition. I applied for a bye, citing I had been one of the fastest juniors for the past season but after my bye was rejected, I set my sights on the long track junior trials as it was in a month and a half from then. So I found a pair of clap skates and the rest is kind of history.

Raf:  It’s funny how things work out like that.  From two fractured vertebrae just a couple of years ago, what some people would have considered a career ender, all the way to the Olympics.  So what’s it like to be on your way to competing at the Olympic games in Sochi?

Gil: It’s pretty surreal – it hasn’t quite sunk in. From the time our trials ended we’ve been on the go, finishing the final preparations before the Olympics. Every day has been so important that we literally have to take it day by day so looking ahead is almost impossible. I’m sure it’ll all sink in more once we touch down in Sochi or walk into the Opening Ceremonies but other than the amount of media that has come about, it’s been just another January in the skating world… as crazy as that might sound.

Raf:  I guess you’ve got plenty to keep you busy.  You’ve actually had a lot of experiences on the World Cup, so up until now what would you say has been the top moment of your skating career?

Gil: Yeah, I mean, for sure winning that World Cup this year was a huge moment for me. Anytime you can stand on the top of a podium is huge but to do it representing your country at that level is definitely something to be proud of. But the highlight of my career had to be after the 500 metres at the Olympic Trials. Finishing 2nd I had pretty much cemented my spot on the Olympic Team but it was being able to celebrate that accomplishment with my friends and family afterwards was so special. Including you Raf, haha.

Raf:  Haha thanks well it was a pretty awesome moment and I was stoked to be there!  Okay so what’s the favourite place you’ve travelled to racing?

Gil: My favourite place that I travelled for racing… it’s a toss up really. Astana, Kazakhstan was amazing – amazing looking city, great oval and I skated pretty good that weekend so that helps. Heerenveen in the Netherlands is always fun to go to. They’re so passionate about skating there that the atmosphere around our competitions is always really fun and exciting. But the city that really caught my eye, and almost too a fault because I was exploring the city so much, was Erfurt, Germany. It’s a small town but the architecture in the city is amazing and there was so much history within the city. I didn’t skate my best competition there so that leaves a bit of a sour taste in my mouth but if I could go back and skate a decent race there I’m sure that would fix it.

Raf:  Cool.  Alright, last one.  What do you do in your downtime when you aren’t training?

Gil: I spend a lot of time on my computer, maybe I shouldn’t say that but I’m pretty addicted to technology. But I’ve recently picked up the guitar so to shut things down at night I like to pick that up and dabble.

Raf:  Thanks very much for sitting down with me today Gil.  Again, congrats, and I’ll be seeing you in Sochi!

Gil: Thanks Raf! It’ll be fun having you there and hopefully we’ll get a chance to celebrate when I’m done!