Race Your Own Race

One of the most common things you’ll hear coaches tell their athletes when it comes to endurance sports is that its absolutely crucial to race your own race once the horn goes.  But to put that advice into practice can be far more challenging than you would think.

Being able to race your own race is a combination of being able to control a number of internal and external factors that can try and alter how the day will play out for you.  Controlling these factors is what will allow you to make sure you no unwanted surprises come your way on race day.  For every athlete, the prep and routines in the days leading up to the race is what will give you and edge when its time to start performing.

Whether you’re racing the local charity 5k run and walk, or on your way to Ironman, its important to have a routine going into the race that you can stick to.  Things like what you eat, when you go to sleep, when you head down to pick up your race package, all can help build familiarity and remove some of the race day jitters that you might get.  Also, that way when something does go awry, you’re better prepared to take it in stride, and it doesn’t feel like your race week is unravelling before your eyes.

If you’re getting set for a goal race that you’ve based your season on, be sure to have everything done and taken care of at least two days before the race.  The day before I did Ironman last year was as uneventful as they come.  I dropped my bike off early in the morning, got in the water for a super easy, super short swim, and then got off my feet and chilled with friends at the hotel for the rest of the day.  It was honestly the best thing I could have done, knowing that everything had been checked and re-checked in the days before took a load off the mind and relieved a lot of stress.

After the horn blows

The funny thing about running races is that people so often seem keen to start out fast, and then get progressively slower through the race.  In my last couple races I’ve found myself victim to this myself and that’s why I wanted to write about it.

I like to have Gold, Silver, and Bronze goals.  Bronze is the time I’ll be happy with and can go home satisfied about.  Silver is my target time or PB that I’ve been pushing for and should be comfortably hard to reach.  Gold should be the target time that if you hit, it’ll be like winning Olympic Gold, like breaking the two hour half marathon barrier, or hitting the 1 hour 40km TT time.

When the time comes to race, target your silver goal and then wait until you’ve got a good read on the race, or around the half way mark, to re-evaluate the race strategy.  At that time you can decide to push and go for the gold, dig deep and stay the course for silver, or stick it out and hang on for bronze.

With all the adrenaline and nerves of race day sometimes it can be challenging to not get caught up and go out too hard.  One little trick I’ve learned is to look up my target time in last year’s race results, then seed yourself accordingly in the start field.  So if you’re looking to run a 1:30 half mary, you should probably be in the front twenty or thirty runners.  If you’re looking to run 2 hours, seed yourself somewhere in the front half of the field, and so on.  Recognize that there will be a lot of people who will start out too quick around you and even people running by you at the start, and don’t be tempted to hold that suicide pace.  It won’t be long  before you see them again, and by midway through the race you’ll be alongside people looking to hit roughly the same time as you, which you can use to give yourself a little extra push. 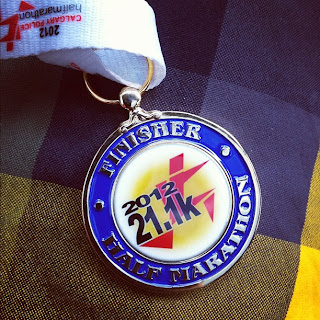 Yesterday I ran the Police Half Marathon and managed to set a PB for the race course at around 1:36.  Its a pretty hilly route so it wasn’t an overall PB, but I’m still really happy with the overall result.  I’m gradually moving up in my age cat and the run was good for 12/99 in the 29 and under group.

I did start out a little too strong though and the last 5km I found myself giving up some time to my overall pace.  It was a bit of a lesson in following my own advice.  Looking back I would have backed off a bit at the beginning and saved some energy for the last couple km’s.  Though I don’t really think this would have changed my overall time, it would probably have felt a bit nicer to finish on a slightly higher note.

Anyways, it was a beautiful day for a race and I’m very proud of all the friends I saw out there, many of whom also set PB’s yesterday!