I review and give my thoughts on the Nike Lunar Flyknit 1 from a runner and triathlete’s point of view. 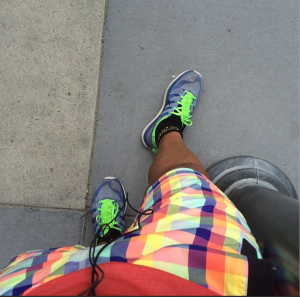 From time to time I’ll get asked what kind of shoes I run in, so I thought it was high time that I actually write up a quick post on my fave pair of shoes.  The Nike Lunar Flyknit 1.

For full disclosure I’m kind of a Nike fan when it comes to shoes. Maybe its the Rafael Nadal fan in me, or maybe I’m just a sucker for marketing, but I really love their shoes.   Their apparel, well thats nice too, but look through my run stuff and its lululemon from top to bottom, until you hit the shoes.

My progression through shoes has evolved as I’ve grew as a runner and triathlete.  I went from being a noob runner about 8 or 9 years ago, constantly plauged by shin splints, IT band issues, and the searing pain of getting dropped on 5k’s by my then girlfriend, now wife; to being what I guess you’d call an experienced runner.  Here’s my evolution of run shoes;

I can talk a lot about each of those shoes from the weight, to the feel, to how quickly they wore out, etc. but I’ll just focus on the Flyknits.

Part of the reason that I’m a big fan of these shoes is the knit upper, which makes the shoes truly unique.   The seamless, one-piece construction method works of the shoe works.  Over time you’ll find that the body of the shoe takes on the shape of your foot, which makes perfect sense considering the make and weave of the material.  With a good pair of running socks you’ll find that these shoes really fit the way that shoes should, and over time, it really feels like the shoe conforms to the distinctiveness of your foot.

Another added benefit that I’ve found with the material of the shoe’s upper is that they regulate temperature fairly well.  I’ve run in +35C in them in Mexico, and -20C in them in Calgary, and never needed more than the socks that I’d normally wear.

My only gripe seems to be a common one for others with the shoe, that the tongue is too short and slides toward the side when running. The issue is more of an annoyance than a functional problem, as the tongue still provides enough protection from the shoelaces.  Honestly, its never bothered me at all, I just sort of notice it at the end of my run.

I’m a midfoot striker and have never had any issues with the cushioning of the shoe.  In terms of lightness and weight, at just under 10 oz, they are about 2 oz’s heavier than Saucony Kinvara’s, and about 3 oz lighter than the tried and tested Asics Gel Nimbus which is fairly popular.  So they’re on the lighter end of the running shoe spectrum, but they certainly don’t compromise cushioning.

I honestly find these shoes to be a bit of an enigma. When you move over to lighter, slightly more minimal shoes that are more geared towards racing you often give up a bit of cushioning in order to reduce the amount of energy lost when your foot impacts the ground.  The gain with lighter shoes with a little less cushioning means more energy to propel you forward, but it also means your bones and joints absorb more of the impact.  I haven’t found that with Nike’s “Lunar” series of shoes.  Having run about a dozen half marathons and two Ironman marathons in the Lunar Flyknits and the LunarGlides before that, I’ve never finished a race with any undue soreness or pain in my feet or shins.

So props to Nike, with the Lunar cushioning, I’m sold on them.

If I have one gripe about the shoes its that they do seem to wear out a little fast.  Its not the cushioning that gradually gives way or collapses, its actually the rubber part of the sole that wears out over time.  The conspiracy theorist and marketing person in me thinks that it may be a product of planned obsolescence.  The Lunar cushioning, which is some kind of space age foam developed for NASA or something like that according to Nike, doesn’t seem to wear out or lose its integrity the way some shoes do.  So maybe they put cheap rubber on the soles so that they wear out sooner and force you to buy new ones? I don’t know.  Even after just a few runs in a brand new pair you’ll find that the rubber already loses a bit of tread.

That being said, I’m one of those people that wears their shoes for a really long time, probably too long.  I’ve got about 900km on one pair of Flyknits, and about 400km on another and they’re still going strong.

Why am I choosing to go the distance in them? Well part of the reason is that they retail for about $190 CDN. Its a steep price to pay but on par with the higher end of run shoes lately.  Generally if you hit a Nike outlet though you can find them for $160CDN in Canada, or $90 in the US.  So I basically buy a new pair every time I make my way to the Premium Outlets in Vegas.

The Nike Lunar Flyknit 1’s are a good looking, awesome pair of shoes that are an excellent choice for midfood strikers looking for a shoe that balances cushioning with weight.  If the shoe fits, you can definitely go the distance in these ones.