To say that a bike is “the perfect road bike” sets a pretty lofty set of expectations for it. It means that the bike must be compliant enough to absorb road vibrations across a series of different surfaces like a Specialized Roubaix, aero enough to slip through the wind like a Cervelo S5, stiff enough to respond to rider input as rapidly as a Cannondale SuperSix Evo, and fun enough to want to ride day after day.

So is the Madone the perfect road bike?

It was a sad day that I listed my beloved Trek Emonda SL6 on Pinkbike but I did it to welcome Trek’s flagship road bike, the Trek Madone into the family.  For those of you who aren’t familiar, the Madone lineage was created during the Trek/Armstrong era in early to mid 2000’s when Trek set out to develop a thoroughbred race bike that was worthy of some of the most dominant riders of its day.  Armstrong’s checkered history aside, the Madone was ridden to victory after victory in that era.

Around 2010 other bike manufacturers began to push the envelope with aero road bikes that would slowly make their way into the peloton.  In response, the Madone began to evolve into a weird sort of cross between a traditional roadbike and an aero bike with a squared off downtube to create a “kammtail virtual foil”.  The characteristics that made it a mainstay of the traditional roadbike market became diluted in Trek’s quest to make a bike current to the day.

In 2014 development of the Madone essentially came to a standstill (or so we thought) and the Trek Emonda would pick up where the Madone left off in 2009/2010 with a non-aero, snappy, lightweight, traditional road bike.  Marketed as a climbing bike with the lightest frame weight in every price category, the Emonda is a capable thoroughbred road bike, that fits the needs and wallets of many enthusiast riders.  But it left a gap in the aero bike market for Trek.

In June 2015, days before the Tour de France, we discovered just exactly what Trek had in the wings with the new, no holds barred, aero Madone.  And they set the standard for what an aero road bike should be today.

The Madone unveiled in 2015 incorporated aero tubing, internally routed cables, an integrated aero stem/bar combination, proprietary centre pull brakes, and best of all, an isoSpeed decoupler right off of Trek’s Domane endurance road bike.  Early reviews, and reviews to date have been overwhelmingly positive for the Madone.  A lot of the shop guys I know hint that the bike as a bike that was developed by Trek to show the rest of the industry just how far ahead of the curve they are.

In contrast, the Madone was unveiled within weeks of Specialized’s much maligned Venge Vias, which wasn’t originally all that well received among riders like Mark Cavendish and Peter Sagan due to sketchy brake performance at high speeds and descents.

So, with such strong impressions of the Madone, this year I traded in the Emonda for the 2017 Madone 9.2.

And what did I find?

This is legitimately one of the best bikes I’ve ever ridden.  First and foremost, the bike is fast.  Secondly, its compliant.  Thirdly, its expensive.  Now I’ll elaborate on each of those points.

Its tempting to write off at least some of the bike’s performance to placebo effect.  I have zero qualms with saying that a bike that is marketed as fast, and looks fast, is going to feel fast.  When you spend the downpayment on a car on a single 16lb bicycle, you’re going to say it feels fast whether it is or not.  But straight up, the bike feels fast.  And I took to one of my favourite time trial loops to empirically determine just how well the bike stacks up against another bike in my quiver, the Trek Speed Concept time trial bike. 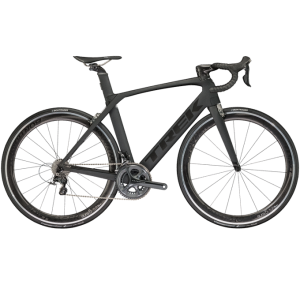 Last year I rode my 2013 Speed Concept 9 Series on an undulating 36.4km loop west of Calgary, aptly named the Springbank Airport TT loop.  At an average power output of 241 watts maxing at 557 watts, and with a light easterly wind on the Speed Concept I clocked 59:59 on the loop with a total elevation gain of 137m.  This year I rode the same loop on the 2017 Madone 9.2 clocking 1:02:42 with a power ouput averaging 235 watts and maxing at 548 watts.  A single key difference between the course conditions is the extremely poor pavement quality on the final 4.5km climb when I rode it on the Madone this year as the pavement was being torn up to be repaved.

Take it for what you will.  Over a 36.7km loop the Madone road bike was 2:43 slower than a no holds barred time trial bike given the same power ouput, same helmet, similar kit, and similar wind conditions.  I’m certain that had the pavement not been complete garbage on the final ascent, I’d be 20-30 seconds closer to the TT bike’s time.

Over a 180km Ironman course at that power output, the Madone would get me to the run about ten to fifteen minutes behind a cyclist on a time trial bike. Granted, the Madone isn’t as fast as a TT bike, but it isn’t much slower either.  And it makes a very compelling argument for riders debating between road and TT for tougher Ironman courses like Lanzarote, Great Britain, Boulder, and even Whistler.

This bike is legitimately fast, and it begs you to go faster.

The S5 was fast, and until now I’d consider it to be the standard by which other aero road bikes ought to be judged.  But one thing that I never liked about it was its unrelenting ability to make your teeth chatter.  Over chip-seal surfaces and rough, cracked roads that you’ll sometimes find on quiet, old back country roads, the Cervelo S5 left quite a bit to be desired.  What’s worse is that there were times where I almost questioned whether I was incurring frame damage with how rigid the frame on the S5 was.

Often the aero qualities of a road bike are directly at odds with overall frame compliance, since its the air foil shape of the downtube and seat tube that can cause so much structural rigidity.  The Madone does a very effective job of addressing this by borrowing the isoSpeed decoupler found on the Trek Domane to allow for a much more plush ride experience.

What the isoSpeed decoupler does it structurally detaches the seat tube from the top tube.  Allowing the seat tube to flex within a given set of parameters in turn provides a much more comfortable ride and is a unique was of creating structural suspension within the bike frame.  And it works.  Though the Madone doesn’t quite mimic the ride quality of some bikes like the Specialized Roubaix, Cervelo RS, and Trek Domane, its plush and comfort wise it feels lot more like my middle of the road Trek Emonda SL6.

Between the isoSpeed decoupler and carbon bar/stem combo, riding the bike blindfolded (which I don’t really recommend) I can’t surmise that any rider would peg this as an aero bike based on ride quality alone.  For an aero road bike, thats a good thing.

There’s a lot to this bike that is going to make your local bike shop love and hate you.  Its not the easiest or quickest bike to put together with one off complexities like proprietary centre pull brakes, complex internal cable routing, and “little flappy things” on the front fork.  It took our pro bike mechanic Jeff Crombie 3 hours to put together, and thats fast.

The devil is in the details

However, its that attention to detail and those little things that set this bike apart from others.  And in fact, there are some parts about this bike that are actually easier to work on than other bikes I’ve had in the past.  Trek moved the rear brake back up to the top of the rear seat stay from behind the bottom bracket as seen on the Madone of years past, and many other aero road and TT bikes today.  In my opinion that was an incredibly well thought out move as dirt tends to accumulate down there and makes keeping the brakes clean a nightmare.  Secondly, in the 2017 iteration of the Madone, Trek increased the clearance between the fork and frame by a millimeter or two to provide more clearance for the aero flaps to move open when turning, as the 2016 version would jam up in the most specific of circumstances.

Its those little things that come as feedback from top level riders, and it helps to reinforce that this bike is a thoroughbred race bike, with only one compromise made for all around performance (that comes next).

When it comes to price, the only good thing that I have to say about the Madone is that interest rates are low these days, and you can probably make some financially irresponsible decisions to make owning this spaceship a reality.  With a sticker price of $5000 USD (roughly a million dollars Canadian) its not a cheap bike.

However, this is a dream bike.  Its a bike that if you’re buying it, you’ve either already got your finances sorted out, or you got a sweet bonus, or you’re keeping this bike for at least a few years.  Its handily one of the most exciting bikes I’ve ever owned and I’m stoked to go ride it right now.

As one of Trek’s top end bikes, you have the option to get the bike via Project One, though there are some cool paint and component options available on their website even at the entry level on the bike as well.  The 2017 Madone 9.2 which I bought also got some sweet upgrades in my opinion over the 2016.  Specifically, the bike went to a murdered out matte black with gloss black lettering and detailing, and got the Bontrager Aura 5 aero wheels, versus the Paradigm RL rims on the 2016.  Off the rack the “entry level” Madone 9.2 with mechanical Ultegra components weighs a hair over 16lbs, putting it in the same weight category as the Trek Emonda SL 6.

So is this the perfect road bike?  Well, I’m not letting go of it anytime soon.