Its been a year now since the first wrist based optical heart monitors started to hit the fitness market with products like the Mio Fuse, the TomTom Runner, and the Fitbit Charge HR.  That technology is now making its way over to more prominent run/activity devices like the Garmin Forerunner 235 and the new Fenix 3 HR.

Here are my thoughts on traditional heart rate straps versus the latest wrist based devices.

When any new technology is introduced, for early adopters and techy athletes, one of the first questions is about the accuracy and reliability of the devices.  For years, the chest based heart rate strap has been the gold standard for heart rate measurement.  Frankly, I don’t really expect anything to change that, as nothing is going to be better than a device that, similar to an EKG, senses the electrical impulses that trigger your heartbeats.

That being said, in the time that I’ve spent using the devices, I’ve worn multiple measurement devices at once to see just how accurate and reliable the devices are during activity.  Anecdotally, in my n=1 research, the wrist based devices didn’t disappoint.  I’ve found that a properly positioned (I’ll get back to this in a moment) optical heart rate device measuring HR at the wrist compares fairly well against the good old chest strap.

DC Rainmaker went into specifics comparing the Garmin Forerunner 225 against a traditional chest strap in a post last year.  And similar to my own experience, his findings occasionally show a lag from one device to another, but rarely more than a 1-2 beat per minute variability between the two measurement tools.  The graph below shows a comparison between my wife’s Garmin 235 and my Wahoo chest strap that I wore during a one hour trainer ride.

Based on results like that, for running and cycling I have no issues using a wrist based heart rate monitor for data collection, and I’ve long replaced my chest strap for running with the Mio Link (I wear a Garmin fenix 3 for most activities, which currently does not have built in optical HR).  I usually still wear a chest strap for cycling however as I prefer not to wear anything on my wrists while riding.

Its important to note that in order for any wrist based optical heart rate monitor to be accurate, the measurement unit that houses the LED lights needs to be flush against the user’s skin.  For that to happen, the optimal positioning for the device is above the bone that sticks out on the top of your wrist, on the outside of your arm.  It took me a bit of time, and a conversation with some of the folks at Garmin to actually figure that out but its how I’d respond to most people who have issues with optical HR being fickle.

For most athletes, a watch or wrist strap is far less intrusive than a than a chest strap.  This can be especially true for women, where chest straps often sit just below, or directly underneath sports bras.  For both men and women the specific placement of chest straps can easily lead to chaffing and discomfort. In and of itself this can be a compelling reason to make the switch over to wrist based HR.

Another reason that I now prefer to use wrist based heart rate monitors over chest straps for running is that I personally find chest straps have a tendency slide down if you tend to sweat a lot.  In cycling this isn’t really an issue as there’s significantly less vertical movement from the wearer, but there have been a couple instances in warmer half marathons and 70.3 races where I’ve stashed my chest strap in a pocket, or tossed it to my wife in a race where I couldn’t get it to stay up comfortably.  The obvious solution to this is to wear the strap tighter, but that can easily lead to the uncomfortable feeling that your breathing is being restricted.

This is where wrist based heart rate monitors really take the win.  Right now I don’t know anyone who is cool with wearing a chest strap for heart rate activity tracking.  Technology has come so far these days and previously you wouldn’t have expected a device that actively measures your heart rate on an ongoing basis would have a very long battery life, but that’s certainly not the case.

Devices like the Forerunner 235 will last up to 11 hours of training or 9 days of activity tracking according to the Garmin website.  In my own experience, with a combination of training about an hour a day, plus wearing the device for activity tracking, I find myself recharging the watch every 4 or 5 days when it looks like the battery is down to about 20%.  I just don’t want to go for a run and have the battery die.

If this amount of recharging your device sounds onerous, just remember that the Apple Watch will kick it in less than a day.  I don’t think that its unreasonable to expect that a device that measures your heart rate, tracks your steps, lets you know who’s calling, syncs data to your smartphone, and tells time, all at once, needs about an hour or two of being plugged in every couple of days. 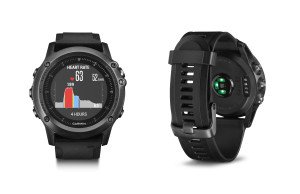 One of the reasons that I’m such a big fan of wrist based oHRM (optical heart rate monitor) is that it introduces the heart rate metric to a lot of users who wouldn’t otherwise be measuring HR simply because they’re not interested in the apparatus of a chest heart rate strap, from both a cost and comfort standpoint.  An integrated one device solution for GPS and heart rate is the next step in widely available fitness tracking, and I think its a good thing for consumers.

Chest based heart rate will be around for a long time, and with other devices now like Garmin HRM Swim which will be perfect for swimmers and triathletes, there are still some really compelling reasons to opt for one device over another.  Serious athletes and data junkies will still probably question the accuracy and consistency of wrist oHRMs, though I think that manufacturers such as Garmin and Mio have made great lengths towards mitigating potential issues there.  But for everything from recreational users to athletes such as myself who love data but prefer all-in-one solutions, I think that devices such as the Garmin Forerunner 235 and upcoming fenix 3 HR are going to be the hot ticket items in 2016.

What are your thoughts?  Have you made the switch to oHRM?  Or are you sticking with the tried, tested and true chest strap?  Comment below!