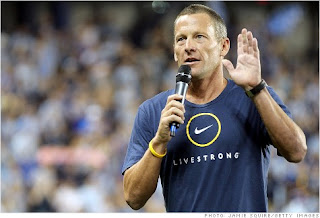 This isn’t a post I particularly looked forward to writing, but I’ve written so much on Lance Armstrong that I figured if I didn’t put something together I would be a bit of a cop out.  So here it goes.

News came out today that Nike has announced they would no longer sponsor Lance Armstrong, and he would be stepping down as the chairman of the Livestrong Foundation.  I can’t say that I’m surprised by either of the announcements in light of the evidence that has come forward in the past few weeks that pretty well cements the case put forward by USADA.  Before a lot of this evidence came forward it was easy to dismiss the testimony or words of Betsy Andreu, Greg Lemond, and maybe even Tyler Hamilton.  But for the turning point was reading the damning testimony of George Hincapie.

After reading Hincapie’s affidavit, I couldn’t help but feel saddened more than anything, like a kid who still wanted to believe there was a Santa Claus, but whose parents finally insisted that there wasn’t.  When one of cycling’s most trusted names, and Lance Armstrong’s long time friend and lieutenant, comes forward and admits to doping alongside Armstrong, I had to admit that there was no longer even a shadow of a doubt that he had taken banned substances in pursuit of his seven tour wins.

I always said, if he doped then he doped and beat a field of dopers, if he was clean then he was clean and beat a field of dopers.  I still stand by that statement for the most part, and what a lot of people don’t seem to get is that Lance and many of his teammates didn’t take PEDs and conduct banned procedures to gain some sort of unfair advantage over the field, what they did was par for the course at the time.  Doping was so systematic and accepted in the sport of cycling for so many years, whether or not someone doped was a simply a joke, they all did.  Looking through the record books for many of the years that Lance won, you’d have to go more than a few spots down the list to find a rider that was free of allegations or convictions of blood doping or banned substance use.  That’s why I believe that if and when Lance loses his titles, the UCI should simply leave the seven years he won blank, as a reminder to a dark period in the sport where no rider was beyond reproach or conviction.

I don’t think that Lance was the kingpin of a complex and organized doping ring.  But I do believe he strongly expected the team to fall in step with team orders, whether it be in catching a break in the peleton, negotiating a long technical climb in the Tour, or taking PEDs the day before a big stage.  The use of banned substances was too ingrained and too systematic in the sport among athletes, physicians, coaches, and managers, for any one person to be held entirely accountable.  But its important that we now learn from the case against him and look at cycling and sport culture as a whole to figure out what’s going wrong.

Its easy to hang this around the neck of a few people, and for armchair critics to stand by vilify Lance Armstrong and his teammates.  Though I do not believe that what any of them did is right, that’s not to say that I don’t understand why they did it.  The Milgram experiments in the 1960’s demonstrated that a human’s propensity to perform acts that conflict with our personal conscience when instructed to by an authority figure is far greater than many of us would like to believe.  If you place yourself in the shoes of a young athlete whose future and livelihood depends on your athletic performance, knowing that your competition takes banned substances, imagine that your team physician hands you a syringe or series of pills to take along with your B12 shot or daily nutritional supplements— suddenly the decision to stay clean isn’t so clear cut.  Its important to realize that for each athlete who doped, including Lance Armstrong, that day came when they had to make that decision, and in the sage words of the exiled Jedi Master Yoda, “If once your start down the dark path, forever will it dominate your destiny”.

Cycling is unique in that few sports place so much money and success on the baseline physiological performance of its athletes rather than the skills of the actual athletes.  In other words, in cycling you get paid to be an athlete in the top percentile of the top percentile of human performance, and you can enhance that performance by taking banned substances.  In other sports like hockey, soccer, basketball, golf, tennis, your paycheque comes from the skills that you develop at a very young age and the thousands of hours you commit to your sport through your lifetime, which is a lot harder to fake.  Look at the USADA sanctions list and you’ll see a long list of cyclists and track and field athletes.  If there was a pill to improve your free throw percentages, or lower your handicap, you could bet that someone at the professional level would be taking it and they’d be on that list as well.

What I hope is done now is that the same resources that were spent on Lance Armstrong are now spent on cleaning up sport from the amateur levels and up.  What this case has taught us is that you can’t be too big or too good to be caught, and that’s a good starting point, but we also need to ensure that developing athletes should never have to face the decision to accept that unfair advantage the way that Hamilton, Hincapie, and Armstrong did almost 15 years ago.  I hear so often from so many friends at the top amateur and local elite levels that they’ve come across athletes playing a little past the grey area of what’s considered fair or have outright been put in situations where they have come across competitors who weren’t racing clean.  And that doping can run from such low levels of sport is what I find truly disconcerting, because sport doesn’t get any cleaner as you ascend the ranks.

With that in mind, I think what would be best for Armstrong, and for sport, would be that Armstrong comes forward with the truth.  From a PR perspective, and from the perspective of a fan of his, its what would be best for him, his foundation, and his sponsors.  Marion Jones’ tearful apology resounded with fans and the general public and its what earned her a chance at redemption in the eyes of the world.  Whether he believes it or not, I think Lance has the same opportunity to continue to do good by exposing the undue and extraordinary pressures that are placed on athletes in cycling and other human performance based sports in general.  Revealing the cavalier attitudes towards doping and win at all costs culture that came along with cycling in that era would likely help to change public opinion towards him, and while it may damage the sport’s history, it would create promise for its future.

Its with regret that I’m writing about him as an athlete who has been brought down from one of the greats. I’m not sure how but I truly hope that in some way or another he can now find a way to redeem himself and earn back a little bit of that greatness.  As a cancer survivor his work to inspire hope for people battling cancer can’t be taken away and is another part of the reason why I think its so important that he comes forward to publicly acknowledge what he’s done.  The story of his battle with cancer and what he has done to change our attitudes about what it means to be diagnosed with the disease is something that couldn’t be cheated, and should never be taken away.

I still have great respect for Lance Armstrong’s athletic accomplishments, and I believe that if he raced in an era that he and the rest of the field were completely clean, he still would have gone down in the record books as one of the sport’s greatest names.  I hope he now does what is right for himself, for the causes he has worked for, and for sport.