Motivation for the Marathon

Well, in my last blog post I opened by stating how marathon race week brings about a range of emotions.  How true that was.

Thursday evening I went down to the hot tub to listen to some music, have a stretch, and focus on what I would do on race day.  Recognizing that I was maybe a little bit too relaxed about what was waiting for me on race day, I decided I would hit up some of my favourite go-to YouTube videos for some pre race motivation.  Its something I recognize the need to do in order to find a little more in the tank when the going gets tough.  I’ll get back to those videos at the end of the post though.  After getting worked up watching those videos, I felt like I needed to share something else with you all.

Some of the people reading this may need to read this, some may not, but its my way of wishing you all good luck. 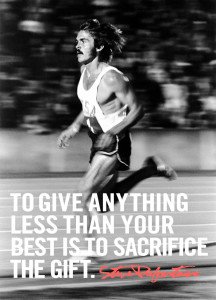 When Sunday morning comes around and you make your way to the start line, think about not just running for yourself, but for everyone around you.  In the time since I’ve gotten into racing I’ve learned that one of the most rewarding things in sport is the ability to share your experiences with others.  For some people sport comes naturally, for others the rewards of sport are always earned, and never given.  Regardless, by getting yourself to that start line you’ve earned the right to encourage others to do the same.

I’ve brought this up in my blog a couple of times before, but when I first started racing triathlon, I was an abysmal swimmer.  I couldn’t swim 50 continuous metres, and would bonk in a 5km run around the neighbourhood.  I spent years watching NBC’s coverage of the Ironman World Championships in Kona, wishing that I could muster the courage to do a sprint triathlon one day.  But watching the stories of age group triathletes in that coverage one December afternoon I realized that the only person keeping me from doing my first triathlon was me.

From the stories of Jon Blais who was battling ALS when he rolled across the finish line at Ironman, to Chrissie Wellington who went from an age grouper to the queen of Kona in a few short years inspired me to pursue a goal that I had previously characterized as just short of impossible.

Eighteen months later I crossed the finish line of Ironman Canada with my now brother-in-law Keith Blundell.  In the time since then I’ve habitually pushed each and every one of my friends and family to throw a hail Mary every once and again and set a goal that both makes them stoked, and scares the crap out of them (sometimes I push them a little more than they’d like!).  The reason being because not once have I, or any one of them looked back with even an ounce of regret over choosing to chase something down just outside of their grasp.

So going back to what I said earlier, don’t just run for yourself on race day.  Run for the people who have believed in you on your way to your goal, and run to show them that everything that they need to finish their own race race and reach their goals is already inside of them.  Leave it all out there on the course and run with every fibre of your being to show yourself and everyone else that to struggle and succeed proves that resilience is one of the most beautiful parts of the human condition.

With that, I’ll share a few quotes and a few of those videos that I talked about in the hope that you might draw something from them that will give you that little extra fight on race day.

Thanks for reading. And good luck.  I’ll see you at the finish.

“It is not the critic who counts; not the man who points out how the strong man stumbles, or where the doer of deeds could have done them better. The credit belongs to the man who is actually in the arena, whose face is marred by dust and sweat and blood; who strives valiantly; who errs, who comes short again and again, because there is no effort without error and shortcoming; but who does actually strive to do the deeds; who knows great enthusiasms, the great devotions; who spends himself in a worthy cause; who at the best knows in the end the triumph of high achievement, and who at the worst, if he fails, at least fails while daring greatly, so that his place shall never be with those cold and timid souls who neither know victory nor defeat.” – Theodore Roosevelt

“Our deepest fear is not that we are inadequate. Our deepest fear is that we are powerful beyond measure. It is our light, not our darkness that most frightens us. We ask ourselves, ‘Who am I to be brilliant, gorgeous, talented, fabulous?’ Actually, who are you not to be? You are a child of God. Your playing small does not serve the world. There is nothing enlightened about shrinking so that other people won’t feel insecure around you. We are all meant to shine, as children do. We were born to make manifest the glory of God that is within us. It’s not just in some of us; it’s in everyone. And as we let our own light shine, we unconsciously give other people permission to do the same. As we are liberated from our own fear, our presence automatically liberates others.” ― Marianne Williamson

“Some people create with words or with music or with a brush and paints. I like to make something beautiful when I run. I like to make people stop and say, ‘I’ve never seen anyone run like that before.’ It’s more than just a race, it’s a style. It’s doing something better than anyone else. It’s being creative.” – Steve Prefontaine