Running can be boring.  There, I said it.  Its out in the open.  Sure, there’s something Zen about waking up at the crack of dawn and going for a peaceful 5k while the world sleeps.  That’s what those Nike commercials with someone standing with their hands on hips on a mountain peak with the silhouette of the horizon are trying to tell us.  And when its not a beautiful misty morning that we’re running then its got to be either through a lush green forest, or vibrant urban jungle (probably New York, but maybe Chicago).

But when you distil the marketing motivational messages out of the mix, a lot of runs are along one of 3 or 4 routine routes that you often follow, and if you’re training for a big race your runs are at a prescribed pace, for a prescribed time or distance. Riveting.

Now, don’t get me wrong, I’m a huge advocate for consistency and structure in training.  The single most important factor towards reaching your goals is consistency.  But consistency is not to be merged with monotony.  Throwing some spice into the mix is always a good thing and could be what you need to get you stoked about running when you’re trying to get out of the mid training cycle doldrums.

Here are a few ways to get amped up about your next run.

Run with a Group 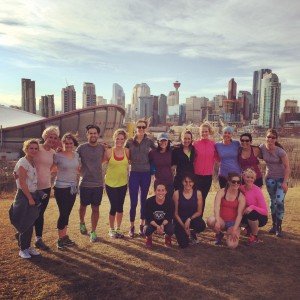 This is the easiest one.  Running with a group is a great opportunity to engage with other runners at other skill levels and just meet some new people.  As a lululemon run ambassador I’ve been leading my Tuesday night run group for almost 3 years now and every Tuesday when we get a fresh face I’m genuinely excited to see someone new, and so are the “regulars”.  Whether you’re just getting into running and need to push yourself a bit, or whether you’ve been running for a while and are looking to shoot the breeze with some other runners on a recovery run, there’s something to get out of it.  I can’t speak for all run groups like MEC or Running Room (they’re great too), but find any lululemon in any city and ask them about their run club, all levels are welcome so fast or slow and everyone in between, we’d love to have you.

I usually run with my Garmin, but I always run with Strava.  Last night at run club we were trying to hammer out some quick hill sprints and were using Strava to figure out who was the fastest up the “Hill of Auzz”.  For a couple of the more seasoned runners, I asked the deep philosophical question, “If a person goes for a run but didn’t put it on Strava, did the person go for a run at all?”

Strava is a cool app similar to Nike’s Run Tracker, the difference being that it allows you to view “segments”, or defined trails or sections of popular routes anywhere from a couple hundred meters to several kilometers, and see who else has run them and how you measure up versus everyone else, or just certain demographics or among your friends.  Its essentially Facebook for runners and cyclists and its awesome.  It gives you the opportunity to set goals like trying to beat your previous time up that killer hill, or become the Queen of the Mountain on beastly big set of stairs.  If you do happen to sign up, be sure to give me a follow here!

I know a lot of people who treat going for a run and working out like brushing their teeth.  Its something that you’ve got to do.  You’re not passionate about it (unless you’re a dental hygienist or something), but you do it because you know its good for you and you generally feel good afterwards.  Honestly running shouldn’t be like that and I think that setting a goal and getting yourself into an atmosphere of people who’ve done the same is one of the best ways to get really engaged in the sport.

Even if you’re already signed up for a marathon or a half marathon, change things up a little with a mid season 5k where you can lay it all out there.  Its all about keeping things interesting! 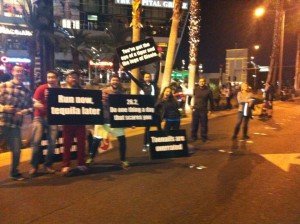 SeaWheeze. The Rock and Roll Series.  Zombie Run.  Color Me Rad.  Underwear Affair.  And the one I’m seriously stoked about, SHOW & GLOW on the BOW.  One of the coolest things I’ve seen over the past couple years is the growth in fun runs.  With the huge growth in overall run participation over the past few years, specifically among the younger female demographics (yes gentlemen, women account for well over half of all finishers at all distances up females up to the half marathon, and women 18-34 account for 44% of the gender demographic), it was only a matter of time before running and neon actually combined forces to make something as awesome as glow in the dark runs.

Anyways, I’ll talk for a second about the SHOW & GLOW on the BOW.  It’s a 5km fun run starting and finishing at Eau Claire with tight, bright, and neon being the dress code.  It takes place Saturday May 10th with pre race festivities commencing at 7:30pm and the run getting under way around 9pm and an afterparty going down at The Roadhouse!  Early bird tickets are just $35 and full price tickets will be $45 with proceeds benefiting The Alberta Cancer Foundation.

Running is awesome but only if you’re down to make it that way.  Its one of those things where you only get what you put in to it and if all you’re investing in it is your time, then you’re missing a lot of what it has to offer.  So join a run group, or get on Strava, or find a fun run, or get your friends to join you, or better yet do it all, and get all you can out of running and somewhere along the way you might just fall in love with it.