Its been about nine months that I’ve been rocking the fenix 3 and I thought it would be ample time to do a long term review of Garmin’s latest and greatest piece of wearable tech.  I’m not going to go into all the nitty gritty specifics on the watch, because frankly DC Rainmaker’s review is much more thorough than anything I could possibly put together.  You can check out his review here.  But I’ll go through some of my favourite points on the watch and some things that I really hope to see in the future.

To get the ball rolling on this review, I’ll say that I love this piece of tech.  My intent with the next few paragraphs is to help you decide whether or not this is a piece of tech that you want to invest in yourself.

The fenix 3’s origins are as a rugged trail watch but the piece has evolved into a legit multisport watch.  Out of the box the watch is ready to go with a range of sports (specifically, XC Skiing, Alpine Skiing/Boarding, Climbing, Hiking, Trail Running, Indoor/Outdoor Biking and Running, Indoor/Outdoor Swimming, Golfing, Stand Up Paddleboard, Rowing, and even a couple others).

Garmin has a pretty solid handle on traditional GPS and sensor based functions such as biking, running, etc.  If you peruse the Garmin forums and message boards you’d see that there were some early issues with regards to GPS accuracy in areas where there was potential interference with the satellite signals, but my own experiences of late suggest that these have all been pretty well resolved.  Mountain biking with the watch over the past few months I found that signals were quick to acquire and as accurate as I could reasonably determine.

Going beyond the traditional GPS watch functions, I was pleasantly surprised to see just how well other functions such as the swimming features worked.  In the pool the watch can accurately count lengths (after the user specifies the pool size), identify swim strokes, and count strokes per length.  Likewise, on the treadmill, the watch uses your run cadence and arm stride length combined with from data gathered during outdoor runs, to calculate indoor run distance.  To be honest, this is one of the coolest steps forward in wearable technology over the past few years.  Garmin deserves huge props for identifying opportunities to improve the user experience with products by going beyond GPS to solve seemingly minor annoyances, which actually turn out to be the cause of pretty major frustrations for athletes who can’t do all their training outdoors.

All the Coolest Things 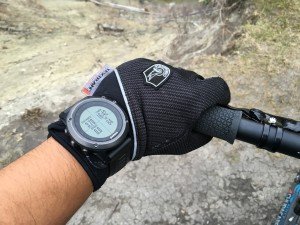 First and foremost, I’m stoked to finally have a sports watch that I can use as an every day watch.  I’m a fan of old school analog and automatic watches, and haven’t worn a digital watch for anything but training since my old Timex Ironman watch as a kid.  This has certainly changed that and the fenix 3 now shares the timekeeping workload with my gentlemanly Omega Seamaster.  Its a good looking watch and despite the price tag, I’ve seen plenty of guys who I’m pretty sure don’t put it through the same paces and multisport trials as I do, which probably speaks to its stylish appeal.  With this departure from boxy, plasticky watches such as the Forerunner series, the fenix 3 successfully demonstrates the form and function need not be mutually exclusive.

Garmin seems to be introducing the same OS for their watches across all platforms and some are coming to see wearable devices such as the VivoActive, the fenix 3, and the Forerunner 920 as proper smart watches.  In this sense I wouldn’t say that they are competing directly with products from the likes of Apple and Samsung, but I do think that they’re offering a great alternative for consumers looking for something more durable, or that comes at the smart watch scene from the fitness end of the spectrum, rather than the tech end.

Besides the obvious fitness apps, the fenix 3 has an array of useful apps that bring the device over into the smart watch category, such as; customizable watch faces, a step counter, compass, barometric altimeter, barometer, music controls for whatever device your watch is synced to via bluetooth, weather display, calendar, and text and device notifications.  This is in addition to the expansive array of apps that third party developers can create for the device.

I’m particularly fond of the track back feature that allows you to orient yourself back towards where you began your run/walk.  A feature that has obvious applications when it comes to trail running and hiking, also lends itself well to running and cycling while travelling.  During a trip to England recently this feature allowed me to run and wander to my heart’s desire without needing to concern myself with remembering the route to get back to my point of origin along the way.

Is the fenix 3 the watch for you?

In the $600-$750 CAD price range, the fenix 3 isn’t an inexpensive watch my any remote stretch, but its certainly a performer.  If you’re looking for a device that can cover the bases from a training and fitness point of view, but thats a little more durable than wearables such as the Apple Watch, the fenix 3 should be a contender for your bucks. The bigger question is whether you can get along with a simpler device such as the Garmin VivoActive, which carries a lot of the functionality of the fenix 3, but without the bulk and at less than half the price.

So to answer that question, if you’re a serious outdoor athlete, an athlete who’s always on the move from one locale to another, or just have a few extra bucks to spend, then the fenix 3 is a great choice.  If you’re looking for a slim smart watch to track your activity and keep you posted on what’s happening on your phone, then perhaps opt with a device like the VivoActive or Apple Watch.