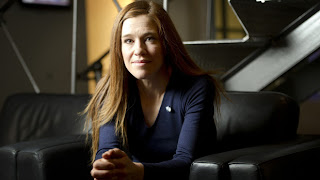 Today is Let’s Talk day which is being promoted by Bell with spokesperson and Canadian Olympic hero Clara Hughes. I didn’t wake up this morning planning on writing a blog post on mental health issues, but its a topic well worth some discussion. As someone who has been personally impacted by an important person in my life going through a battle depression a few years ago, I know its an issue that we too often look past.

One of the greatest impediments to people seeking help when they face challenges around depression is the stigma and social perceptions associated with mental health issues.  As a society depression is a seldom talked about issue that impacts more people than we than we realize. In fact, according to the Canadian Association Mental Health, depression will affect 1 in 5 Canadians, and the other four will know someone impacted by it.  Here are a few more surprising facts on mental illness and depression.

The problem with depression being such a closed, not talked about issue is that it leaves those facing these challenges feeling alone and isolated.  A person going through depression may think that what they’re feeling is “crazy”, or just a part of life, or something that is their own fault, and that admitting it to yourself and others is just a sign of “weakness”.  Because of these stigmas, people battling depression are often reluctant and unwilling to take that first important step towards getting through that fight, the simple act of telling someone.

Lets be clear on one thing, depression has got nothing to do with weakness.  People battling depression aren’t in that fight because they are weak.  Lets look at an example.

Clara Hughes is one of my heroes.  I love what she has done for sport in Canada, and I think she’s one of the greatest athletes that ever lived, the perfect combination of grace and grit.  She’s one of five athletes in history who has medals in both the winter and summer Olympics, more people have walked on the moon.  People who have met her and competed against her say she is the toughest person they’ve ever met.  Clara Hughes also battled with depression.  So if a person like that can be brought down by depression, how has it got anything to do with personal weakness?

Simply talking about depression is a step forward in breaking down stigmas and barriers for those battling with it.

Please, I urge you to take a five minutes right now to learn a little bit more about depression through some of the great resources Bell has put together on their webpage here- Let’s Talk About It.