Our Last Day in Sochi

Before I go on I have to backtrack a bit here. I completely missed a day in my blog, Tuesday. The day that saw Shaun White and all the Americans shut out if the medals at the half pipe.

It was an awesome event, and a other really fun day in the mountain cluster, but what I am dying to talk about is Friday.

The itinerary for the day was a little up in the air as we were trying to offload some tickets to a noon hockey game that really didn’t have teams of our particular interest playing. Eventually we sold the tickets and made our way to Canada House where we were trying to decide between heading up to the mountains to hang out with Gil and some lululemon folks, or trying to get tickets for the Canada versus Austria game.

Friday was a bit of a who’s who in Canada House and we found ourselves snapping lots of pictures.  Throughout our last day at the house Shirl chatted with Tessa Virtue, I accidentally cut off Scott Moir at the bar while he was waiting to get a water,  Roch Voisine performed, and Vladislav Tretiak of the ’72 Summit Series was hanging around.  We also got to share beers with other Canadians who typically weren’t in the house since it was “open house” day.

Eventually we had to make a call on whether or not we were heading up to the mountains or staying at the coast to watch the game.  Much to our dismay we just couldn’t get our hands on four tickets… Until…

A dialled in somebody, who shall remain anonymous, who I’d talked to every day or so, was kind and gracious enough to get us four tickets to the hockey game from the NHLPA Friends and Family box.  The who and the how will forever remain on the DL, but I’ll say now that she’s a really awesome person with a truly inspiring story and it was a pleasure to have hung out with her last week.

So, yeah, our last event of the Olympics was spent in the company of hockey players and their families, trying to be as cool as humanly possible. We showed up in the players lounge as the only people in hockey jerseys as everyone else with the exception of Henrik Sedine was in a suit. We also showed up with plastic Molson Canadian beer cups in hand, as they were serving champagne and wine at the bar.  I’m really glad I didn’t paint my face.

As the puck dropped we made our way to the NHLPA/IIHF/Presidents Box.  Brian Burke, Henrik Sedine, Carey Price, and some NHL big wigs were among the notables hanging around the box that night. We sat right beside the CBC camera and it was a pretty awesome experience all in all.

Post game we returned to the packed players lounge where the list of NHL players and their families became to long to list here.  We did however feel a little less out of place as a lot more of the families wearing jerseys were around. It felt a little like being invited to an academy award after party (not that I’d know), you just have to act cool and know that you just can’t go from person to person doe eyed asking for autographs. Just be cool.

Finally the lights came on, and once  again, it was off to the Swiss House. This time Didi let us in just in time for last call in the Swiss House full of Canadian party goers.

Oh what a night… 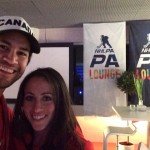 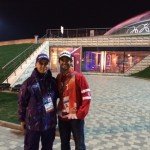 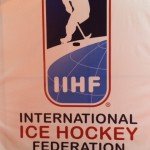 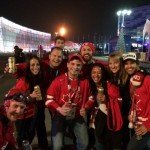