So the cat is out of the bag.  Last week, only a few days before IMC, news broke that Ironman Canada as we know it in the beautiful city of Penticton would be no more.  In 2013 Penticton will reprise its roll as host to iron distance triathletes from around the world, only this time it will be under the Challenge Penticton name.

I spent the weekend in Penticton volunteering and had the opportunity to talk to triathletes and some of those “in the know” individuals who were privy to information before it hit the triathlon newstands.  The reaction around in the community was pretty mixed from both locals and visiting athletes.  On the one hand some people are happy that the reigns to Penticton’s darling race won’t fall into the clutches of the oft derided World Triathlon Corporation, but on the other hand it means losing the universally regarded Ironman name.

A rose by any other name…

Let me make myself clear on one thing, the Challange family puts on amazing races.  I have yet to race one myself, but I’ve rarely heard an ill word spoken about Challenge.  There are many Ironman veterans who are happy to see the series hit North American shores and are looking forward to racing southern BC’s tried, tested and true Iron distance course.  The warm waters of Lake Okanagan will still be there in 2013, Richter and Yellow Lake will still be there in 2013, and most importantly the kind and inviting people of Penticton will still be cheering for athletes in 2013.  A change in the name won’t take that away, to quote Shakespere, “A rose by any other name would smell as sweet”.

All that being said, I don’t think that Challenge Penticton 2013 will be better than Ironman Canada 2012.  I think it’ll be different, not better or worse, just different.  Graham Fraser has put on a top notch race for many years now and has set the bar for what an Ironman race should be.  Racing IMC last year was everything I could have possibly imagined thanks to the town, volunteers, organizers, and athletes.  I know there were some missteps last year with issues around the medals and water but I think that those challenges were presented by circumstances somewhat outside the Race Director’s control.  After the fact Graham went well beyond what was called for to make things right, and that’s the kind of director we all know him to be.  He deserves our thanks and respect for everything he’s done for anyone, athlete or otherwise, who has become part of the Ironman Canada family.

Without the Kona slots, the Ironman name, and the mass start, but with additions like a relay option, I think that Challenge will have a very different feel to it.  Many first timers will no doubt be put off by the loss of the Ironman name and I don’t blame them.  If I was coming into this for my first time in 2013, as soon as I heard the news I would have signed up for Ironman Coeur d’Alene or Ironman Mont Tremblant.  So Penticton will lose some age groupers on that end, but hopefully that is countered by athletes testing the waters with the relay option, which is an exciting addition to the field.

On the other side of the spectrum, the loss of Kona slots means that some of the top pros and age groupers won’t be making an appearance next year in Penticton either.  Now with news that next year’s yet to be located Ironman Canada will have 100 Kona qualifying slots and 5000 pro KQ points, IMC 2013 might be the place to be for some of the top athletes around.

I’m eagerly awaiting the news on where Ironman Canada 2013 will be.  A 3.8km swim in Green Lake in Whistler, followed by a 180km bike ride down the Sea to Sky Highway through Vancouver to transition in the Campbell Valley Regional in White Rock, finished off with a marathon run into into Richmond, would be a fast, epic race, albeit a complete nightmare in terms of logistics.

Otherwise, the Ironman Calgary 70.3 bike route could very easily be modified to 180km with an out and back down Highway 66 up to Elbow Falls.  The run course could be similar to that of the Calgary Marathon route but starting at the south side of the Glenmore Reservoir where the current run course turns around.  In this case the race could lean on existing agreements and permitting, and the logistics would be familiar to RD’s and the host city.  A bike segment into the majestic Rocky Mountains, and a run through downtown Calgary would make the route one of the most beautiful and varying routes in North America.

And of course there is Kelowna.  The city which was originally offered Ironman Canada thirty years ago may now have a second chance.  This would almost surely be a direct response to Challenge Penticton, and may cut the race at the knees.  For this reason alone I’m actually hoping southern BC doesn’t play host to WTC’s revival of IMC.  More races in western Canada is a good thing, and I hope that WTC realizes that the region can support three races including IMCDA without undercutting one another.

If there’s ever a time or place to be as a triathlete in Western Canada, its now.  I’d originally put my plans to race the Ironman distance again on hold until at least 2014, in favour of Olympic and 70.3 distances.  After a of year of keeping my athlete life carefully balanced against my personal life, the plan was to go back down to shorter distances and build speed, seeing how far I could take myself with a year of very intense and focused training, and hopefully win myself a ticket to 70.3 worlds in Vegas.  But after spending the weekend volunteering at IMC, and with the prospect of racing an all new course, I can’t help but be excited at the idea of changing the plan and going back to Ironman next year.

As always, I’d encourage others to look at their plans, and maybe put themselves out there a little in terms of where and what you see your goals for 2013 are.  This really is a great time for the sport and whether you’re racing the inaugural Challenge Penticton, or reborn Ironman Canada, this may be your calling.

By chance I ran into the always gracious and kind Ron Zalko and his wife last Saturday in Penticton.  Ron was the visionary athlete who first brought Ironman to Penticton, and North America.  When looking for a course, he sought a location that mirrored the challenging and rewarding conditions of Kona.  He found it, and with the help of Graham Fraser for the past thirty years the finish line at Lakeshore Drive has become hallowed ground for tens of thousands of Ironman triathletes including myself.  The number of dreams that have been realized and memories that have been formed on the course of Ironman Canada thanks to these gentlemen can’t be counted.

So as the reigns are passed to the Challenge family, and Penticton says a bittersweet goodbye to Ironman Canada, I think its fitting to say thank you to Graham Fraser and Ron Zalko, and the residents of Penticton for the countless cheers and memories that they’ve left with us. 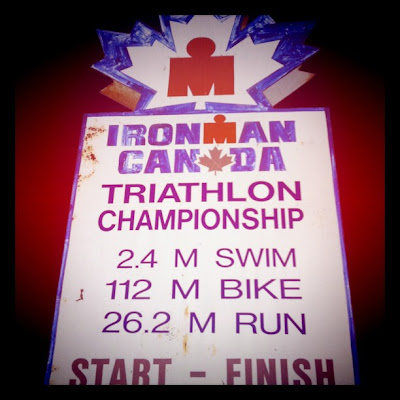