So Sunday was the big day, and with everything fresh in my mind I thought I’d post my race report to let you know how it all went and share my experience with everyone. I’ll be concise and a bit more technical in this post, and sometime in the next few days I’ll talk more about the experience.

Had dinner at about 5:00pm the night before and got to bed around 8:30 or 9:00pm. I woke up at 4:00am and had 2 Extra Calorie Ensures, half a bagel with peanut butter, an orange juice, and a coffee, all good for probably a bit under a thousand calories.

Made my way down to the special needs drop off and body marking at about 5:45am. You could really feel the excitement and nervousness in the air as everyone exchanges greetings in the early dawn light mixed with giant flood lamps. Then took care of all the other pre-race stuff like tire pressure, one last pit stop at the porta-potties, and wetsuit on. Then it was down to the beach…. 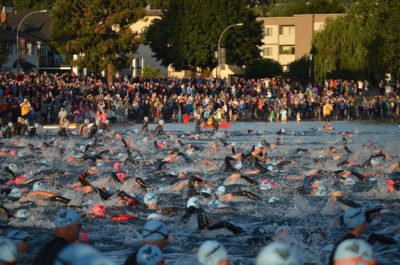 Over 2800 people started on that beach, its a crowd. As per my coach’s suggestions I started on the inside right of the buoys where it is less crowded. I’m not a strong swimmer so I seeded myself a few rows back.

They sing the national anthem and then in about a minute the horn blows. I managed to find myself a pretty open spot of water and didn’t really bother to draft anyone, but I know I had a couple ladies drafting me. Didn’t have too many issues with other swimmers, but around the corner buoys you definitely have to go into a head up swim (don’t do breast unless you want to start frog kicking people behind you).

Early in the swim I had some issues with my left shoulder but they want away after about a thousand meters. After about 2500m I started getting tired and had to just focus on long powerful strokes. For the record, I’m not a great swimmer, my longest continuous swim prior to this was 2100m, and 18 months ago I could say I swam only in the loosest sense of the term, meaning I wouldn’t drown if you threw me into a pool.

Coming back into shore there are some issues with sighting and where the sun is, but with tinted goggles it isnt’ really an issue, my suggestion for anyone else would be to sight the condo towers and not the buoys.

Fast transition, used the wetsuit strippers, already wearing my ride/run kit, so it was helmet on, shoes on, and I was out of there.

The bike was good, I’d ridden the course once already so I knew what to expect. I also know that there are very few people who are as slow as I am in the water, but as fast as I am on the bike, which is a blessing and a curse. So there was a lot of passing.

My plan was to ride at 180-200 watts, but with the heat I was forced to ride on the lower end of this, around 180 watts, given that my heart rate was getting into the high 150’s. I just had to listen to my body and respond to the conditions. I knew that if I rode any harder than I was, that I’d be shot for the marathon in the heat later on.

My advice to anyone would be to skip the first aid station at McLean Creek since stations are every 10 miles, or every 30 to 40 minutes, and you shouldn’t need aid half an hour into the ride.

From McLean to Osoyoos is fast with an overall descending profile and usually a tailwind. If you’re an average rider this is a good place to relax and prepare yourself for Richter and the rollers, but if you’re more experienced or have ridden the course before, you can take a calculated risk and try and make time here since after Richter you’re always either climbing or descending.

Richter’s Pass is a baby if you know how to ride it. The key to Richter, the rollers, Yellow Lake, or any hill in an iron distance triathlon is to maintain the same level of exertion that you would have on the flats. I’m a strong rider and my ftp is roughly 280 watts, or 3.8watts/kg, and there were a lot of people passing me early in some of the climbs. This is completely fine but if you’re breathing is audible and you’re riding out of the saddle in a 180km time trial followed by a marathon in 35 degree heat, you’re doing something wrong.

Once I reached the top of those hills, be it Richter or the rollers, or Yellow Lake, it was “click, click, click” as I geared up and accelerated downhill with the same effort as I climbed up (about 190watts for reference). Trust me, its a lot easier and more fun to pass people going down hill than uphill by keeping your exertion level on both sides.

I didn’t have any issues with tacks and flats, or with aid stations running out of water like some people did. Once in a while I’d see groups of people with flats, but I honestly don’t think it was tacks, just rough roads combined with some maybe too high tire pressures in the desert sun, but I could be wrong. As for aid stations running out of water, that really sucks, I only showered myself with water from a bottle once when a lady offered me a bottle that she’d used to do the same (a class act I should say).

At Yellow Lake I saw Shirl, Jen, and Jill in a Tour de France-esque tunnel of spectators which provided a great boost at a challenging point. That was great, and from then on it was one small climb and 30km of descending into Penticton.

Dismounted my bike, and while I was running it turned on me and I fell on it because of my slippery cleats. Big bruise on my leg, but my ego took the worst of it. Cleats off, running shoes and visor on, sunscreen on, and I was out of there.

This hurt. Something about getting off your bike after a 180km bikeride and going to run a marathon at 2:30pm in 34C (94F) heat is mentally challenging. My original plan was to run 5:20km’s and only walk the aid stations if necessary but it quickly became clear that this marathon was about surviving the heat.

Your legs never feel great when you start the run in a triathlon and this case was no different. After about 5km I was starting to recognize that keeping my body temp down would be critical. So the plan changed to walking the aid stations and doing everything I could to keep cool, sponges, water, ice, etc.

At the 8km aid station I was kind of a jerk and walked right by Shirl, her family, and some of my friends. I knew they were there and I could hear them, but that was probably the first aid station I walked and I was simply in a world of hurt and needed every last ounce of energy to keep moving forward. After that point though I thought about how those people were there for me and I owed it to them, and myself to HTFU and get on with it.

Jordan and the Tri It crew were about on bikes providing words of encouragement telling me I looked strong. But when I started seeing some of the pros walking I started thinking about how easy it would be to slow down and how much time I had to finish. Then I saw none other than Janelle Morrison, a true inspiration for me, and she reminded me of the wise words she shared with me a couple weeks before, “you owe it to yourself to fight”. My pace picked up, and I wasn’t about to back down.

My wonderful fiancée Shirley, and two incredible friends Jen and Jill were my catchers and I was so happy that they were there on the other side of the line rather than somewhere back on the course. They brought me pizza, pepsi, water, and smiles.

Coming down that finishing chute was like… well finishing an Ironman. You literally have thousands of people cheering for you as you run down the carpet, and after 42km of you body telling you to stop, all of the sudden, you’re done. Its a mix of all the bad things you’d expect from a 226km day, completely muted by the relief, exhilaration, and happiness of landing among the stars for just a few brief seconds.

One quote sums it all up best…

“I firmly believe that any man’s finest hour, the greatest fulfillment of all that he holds dear, is the moment when he has worked his heart out in a good cause and lies exhausted on the field of battle – victorious”