Its hard to put in to words what we took away from the time we spent in Havana, Cuba.  We spent time with athletes from kids playing soccer in the street right up to Cuba’s top elite triathletes and cyclists.  And over the next few blog posts I’ll talk more about what those experiences were like, but right now I just want to share a few words about the importance of turning ideas into action.

To give you some back story to how Inspire Sport began, I sat down with my friend Willy Gonzalez in January of 2016 for coffee to talk business and sports.  We’re both cyclists and triathletes so it was nice catching up and talking about what we had in store for the 2016 season.  Willy is a Cuban born Canadian who came to Canada shortly before he would have been funnelled into Cuba’s national cycling program.  Towards the end of our conversation Willy humbly asked me if I could talk to some of the folks at Ridley’s Cycle, where I manage social media and help with sales, and asked if there were any flat tires, or broken chains that we could spare for him to bring down to Cuba during his upcoming trip to race the two week Vuelta de Cuba.  I replied by saying there was a little more that I could do than that.  And thats when it all started.

I didn’t know that at 10am on January 15, 2016, an idea was set into motion that would touch us down in Cuba three months to the day from when we first met to talk about what would later become Inspire Sport.

Ideas are a dime a dozen.  People can talk all they want about doing something great for the world but the road from an idea to an action is fraught with apprehension, fear of failure, and self doubt.  But looking back at what we accomplished over the past three months I learned that overcoming those hurdles is as simple as just doing something.  Anything really.

As soon as we had the idea of bringing gear down to Cuba, one of the first steps towards making an idea a reality was simply telling people.  Setting up coffee with other influencers was key in setting this big machine into motion.  And one thing that my time with lululemon has taught me, is that you should never be afraid to think big, and that sharing ideas with others can quickly build momentum and make big hairy audacious goals happen.

Sometimes you don’t know what someone can bring to the table until you share an idea with them.  Were it not for the unbridled enthusiasm of the owners of Tri It Multisport, Rose Serpico, a Cuban-Canadian herself, and Richelle Love, what took just ninety days could have easily taken nine months.  Without the support of my fellow lululemon ambassadors Jilaine Beddoe, Randelle Lusk, Andrew Obrecht, and Mallory Chapman, who I sat down with personally to talk about this project, our reach into Calgary’s community of givers would not have been what it became.  The support of organizations including; Tri It Multisport, Ridley’s Cycle, Scotiabank Calgary Marathon, Junction 9 Yoga & Pilates, YYC Cycle, More than Sport, Strava, Skechers, and Westjet allowed us to be the change agents that we could not have imagined becoming as quickly as we did.  Our athletes Willy Gonzalez and Madi Serpico showed us so much of the commonalities between Canadian and Cuban athletes.  Lastly, without the support, logistical skills, and storytelling prowess of my wonderful wife Shirley, Inspire Sport with have neither a name, a brand, entry into Cuba, a means for which to transport everything, and a whole bunch of other things. 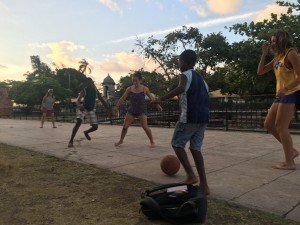 Sport has the power to change lives.  There were moments when we were collecting equipment and gear when I paused and thought about everything else that athletes around the world need.  From clean water, to books, to toothpaste, to safe housing, the list is long.  But on our first evening I watched Shirley, Madi, and Rose play soccer with some kids in Havana with just a half inflated basketball and some hats lain down as goal posts.  It reminded me of playing soccer with a tennis ball before school would start in grade school, likewise we would lay down some backpacks or a couple hats as goal posts.  Whether in Canada or Cuba, you can’t take sports away from kids and there are some compelling reasons why you never should.  More than just a game, sports are a platform through which communities forge bonds, friendships are nourished, and life skills are learned.  If anything, in places around the world where kids don’t have Playstations, iPhone games, or access to the many amenities we enjoy here in North America, sports matter more.

There are so many other people who contributed to Inspire Sport and believe me, we’re just getting started.  We’re going to be doing things a little bit differently and we’re going to be turning some heads from here on out.

Thank you again to everyone who so generously contributed to this endeavor.  From waterbottles to bikes, every single contribution made a difference.