How to be a great fan

Well I’ve written plenty of posts on how to effectively race triathlons, but it didn’t dawn on me until watching the last couple stages at the Tour de France, that I’ve never really talked about how to be an awesome fan at a race.  Now I know that sounds a bit odd, but there is definitely a way to be an awesome fan, and then there’s a way to be a fan that doesn’t really encourage anyone, which I guess would constitute a “bad” fan.

As an athlete I can honestly say that spectators and fans make a world of difference during the race.  Their cheers can instantly transfer a seemingly endless amount of energy to you, and their enthusiasm can be the difference between qualifying for a Kona slot or going home empty handed, or the difference finishing the race with a walk and a smile or taking the dreaded DNF.

So here are a few pointers that I’ve put together.  Feel free to share them with your friends, family, or anyone who might be headed out to IM Calgary 70.3, Ironman Canada, Mont Tremblant, Challenge Penticton, Kona, Vegas, or wherever else! 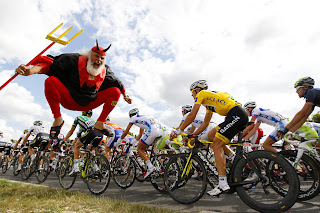