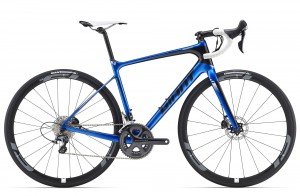 The Giant Defy Advanced Pro is the world’s largest bike manufacturer’s response to endurance road bikes such as the Trek Domane, and the Specialized Roubaix.  The bike is marketed by Giant as a bike that is “engineered for real-world performance, even on rough roads and the longest days”,  while other bikes in the lineup like Giant TCR would be comparable to a lightweight traditional road bike like the Trek Emonda, Cannondale SuperSix, or Specialized Allez, and the Giant Propel would be more akin to a Trek Madone or a Cervelo S-series bike.

For the 2015/2016 year my bike of choice was the Trek Emonda SL 6.  In every respect the Trek Emonda SL 6 was one of the most well balanced and responsive road bikes I’ve ever ridden.  A few weeks ago I had the opportunity to ride Giant’s take on the endurance road bike, the Defy Advanced Pro.  So, does it depose the Emonda as one of my favourite bikes for long rides?  Lets see…

Lets just jump right into it.  The ride characteristics of the Giant Defy Advanced Pro were a lot better than I had expected.  The route that I rode the Giant Defy on includes a long, winding, high speed descent.  Carving through the turns I couldn’t help but notice how well planted and stable the bike felt as I leaned into some long, broad corners at around 60kph.  So credit where credit is due, at the very least this is a very capable bike at a decent price (more on that later).

As far as power transfer is concerned, I found the bike to be good, even great, but not excellent.  In my humble opinion it still doesn’t stack up quite as well against the lightweight, Trek Emonda SL 6 with its wide and super stiff bottom bracket, or the Cannondale SuperSix which really set the bar for snappy, responsive road bikes a few years ago.  Its not that the bike doesn’t boast really solid power transfer, its just that it doesn’t feel quite as snappy as other higher end (albeit more expensive) bikes in the product category.

Now, in regards to ride quality, I was very pleasantly surprised at how well the bike muted road vibrations on some of those more teeth chattery pavement surfaces.  Giant attributes this to the bike’s long wheelbase, comfortable ‘D-Fuse’ carbon seat post and superior torsional stiffness in the forks.  Its not quite as plush at the IsoSpeed Decoupler that you’ll find on the Trek Domane but the D-Fuse seatpost was surprisingly adept towards mitigating rider fatigue due to rougher surfaces.  I have no doubt in my mind that if you’re looking to tackle some chipseal surfaces, gravel, or are looking for a comfortable Gran Fondo road bike, switching the 25mm tires out for 28mm would make this one of the most easy riding bikes you could buy.  In automotive terms, think Caddy smoothness with Bimmer agility.

I feel like this topic deserves its own mention.  I’ve been meaning to write an entirely separate blog post to voice my thoughts on road discs, but for now this will do.  At Ridley’s Cycle, the shop I work with, we get a lot of clients coming in asking about road discs, some individuals asking whether or not it should be a consideration, others making it a criteria for their road bike purchase.

Honestly, I still think that the bicycle industry addressed a problem that didn’t really need solving with road discs.  Giant seems to be pushing road discs pretty hard into their product lineup with discs making their way into every Defy spec with the exception of the most entry level aluminium frames, and a few of the TCR models.

Point in case, I often respond to clients and friends asking about discs by turning it around and asking them “why do you think you need discs?”.  The response is never that they need more stopping power in variable weather conditions and/or during high speed descents.  And these are the only two scenarios where I’m convinced that road discs present a material advantage over traditional calliper brakes.

Its not that I think that hydraulic road discs are inferior, its just that I don’t see them presenting a material advantage.  But for the record, I would take Shimano 105 and Tiagra calliper brakes over mechanical road discs any day.  So on the long list of things to consider when purchasing a road bike, I would say that frame quality, bike fit, drivetrain spec, and value all take precedence over hydro road disc versus 105/Ultegra/Dura-Ace calliper brakes.

And remember, if you’re planning to get into bike racing, even at the Cat 5 level, road discs are still prohibited even at the local level.  Making road discs a non-starter for more competitive cyclists.

Giant is able to outperform almost every other bicycle brand on the market when it comes to value by virtue of the fact that they’re the worlds largest bike manufacturer.  That means that they make bike frames for themselves, as well as some other very well known brands, albeit to the specs provided by other companies.  This allows them to take advantage of economies of scale and greater buying power to provide bikes at very aggressive price points that others simply can’t compete with.

Comparably spec’d the Giant Defy Advanced Pro 2 is just $3500 for an Ultegra spec’d endurance road bike that tips the scales in the mid 18lb range.  In contrast, the Trek Domane S6 will set you back $3700 (and you won’t get hydro disc brakes, if that still matters to you after my little diatribe).  Moreover, to get onto a Trek spec’d with Ultegra Di2, you’re looking at the Trek Domane SL 7 that costs $5999, though you’ll be getting a higher end frame going from the S-series frame to the SL-series on the Domane.

Additionally, with such great value on these bikes, they do tend to vanish from Giant’s inventory relatively early in the year.  So if you do plan on snagging one, start contacting your local bike shop around September/October to check on availability.

Who should buy this?