I had been doing a pretty decent job keeping up with my blog posts in Sochi over the first few days, but as the Games kept on, the pace proved tough to maintain.

I’ll give a quick recap of the day by day in Sochi, as much for my own journal keeping as for your reading enjoyment.

Through most of the days we would find ourselves waking up at about 11am, grabbing some coffee, and setting out on the hour or so walk to the grounds.

The mercury hit 18C on Wednesday so basically we, and probably most of the Canadians at the Coastal cluster found ourselves enjoying beers on the lawn of Canada House.  Some were pre gaming before the walk to the Canada-US women’s game, and we were relaxing before heading off to Denny’s race.  The race that Gil, now famously, stepped aside to let his friend and teammate compete.

To say that we were nervous through the 1000m long track would be an understatement.  I probably don’t really need to explain why we were nervous, but I’ll share my thoughts on the subject for a few moments.  Gil made the choice to let Denny race in his place without any undue pressure or expectation of gains in return. That’s a fact. The 1000m is Denny’s distance, and Gil is both Denny’s friend and teammate, and Gil knew that Denny was far and away our best medal contender. As a natural, humble leader, who leads by example, I believe Gil did the right thing, and the only thing that in those circumstances his upstanding values would allow. And I would hope that in the same position I would have the strength of character to do the same.

Knowing that, none of us wanted to see his decision to be made in vein. We were nervous. With Denny racing in the 16th pairing, and with heavyweights like Shauni Davis coming in later pairings, it was pretty tense even after Denny laid down the second best time of the night. But his grasp on silver stuck, and he went on the the podium that night. It was awesome, a fairy tale ending.

After speedskating we hustled over the the neighbouring venue to catch pairs Ice Dance, frees. I know nothing about Figure Skating so I was relying on Shirls play by plays to keep me in on what was going on. Honestly it was pretty engaging and exciting. These athletes have talent, and loads of it.  To balance the pure physical demands of pairs figure skating with the art and grace that they appear to effortlessly exude is a feat.

Thursday was a day filled with pats on the back, beers, chatting with Gil between his media interviews, hockey, and pin trading.  Yes, a pretty random sort of day.

The pats on the back were for guys like Gil, Denny, the families, the other medalists, etc.  It was just a great day all around.  The beers were once again thanks to the balmy weather and the relaxed atmosphere now that the weight if some of the big races for our contingent were through with.

With regards to the pin trading, well Canada House had just received an influx of Team Canada pins and just about every Russian that we came across really wanted to trade pins, or toques, or mitts.  We forgot to bring pins from back home so we bought a bunch of pins and had some big catching up to do.

That night was also our first team Canada hockey game, Canada versus Norway.  Though our men came out a little bit lacklustre in the first period, it was an awesome game and an awesome atmosphere.  My favourite moment of the nit though was probably when I turned around puzzled by the voice of a young Canada fan a couple rows behind me. It turned out to be this little girl, probably not older than 10 or 12, who to our hearts delight just kept yelling “Canada Go!” or “Canada number 1!”.

At the end of the night we found ourselves at the Swiss House, or trying to get into the Swiss House anyways. The remained of the night was filled with the antics of a Russian bouncer desperate to make a one sided pin trade favouring himself in between his scooter rides, and an unflinching Swiss bar manager who in good humour absolutely would not let anyone else into the venue. In spite if my insistence of my respect and affection for all things Swiss (chocolate, watches, Swiss Air, Swiss cheese, Swiss knives, Roger Federer) this gentlemanly bar manager, Didi as he was nicknamed, who probably served in the Swiss Special Forces, would have none of it.

And with that we eventually called it a night. 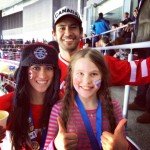 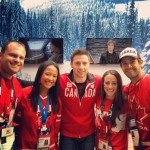 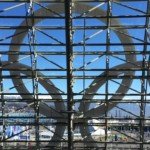 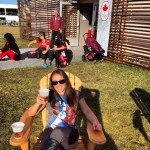 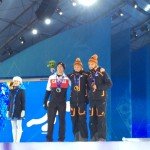