Giving Cuban Athletes a Hand Up with Willy Gonzalez 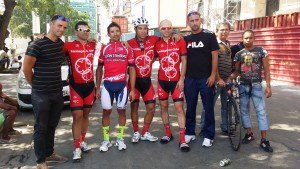 I recently sat down for a coffee with a friend of mine, Cat 1 cyclist and top level amateur triathlete Willy Gonzalez. This February Willy will be racing in the Vuelta a Cuba, which is a 14 day cycling stage race which attracts some of the top cyclists from Cuba and South America.  While the challenge and perseverance required to compete in a multi-day stage race can be an article in and of itself, this post is going to talk about the tenacity
Cuba’s athletic development programs and the deserving support that we can lend them.

Originally from Cuba, Willy himself attended a sport school for gifted athletes prior to emigrating to Canada. During a visit in 2015 to race in last year’s Vuelta a Cuba, Willy visited the school that he himself was a product of.

Time changes a place and the embargo imposed by the United States decades ago coupled with challenging socio-economic conditions has left some parts of Cuba to sit still in a moment in time, while others aged beyond their years. The same circumstances that have made Cuba’s automotive industry ubiquitous with vintage vehicles and aging classics have also made access to sports equipment anywhere from challenging to just short of impossible.

It’s easy for the mainstream to write sports off as trivial diversions, or recreational pastimes meant to keep us fit between sitting at desks and going about our day. But for an athlete, sport can be a way of one identifies his or her self.  And for a kid growing up in the developed or developing world, it can mean even more, sport can mean hope and something to strive for.

For the kids on Cuba’s national triathlon development squad a simple pair of Speedo swim shorts aren’t a given, a new set of goggles aren’t to be taken for granted, and a high-end carbon bike is an unthinkable luxury. But what the squad and its coaches lack in resources they make up for with ingenuity and perseverance. Willy showed me pictures of lane ropes in the pool buoyed by empty water bottles, and kids wearing race kits they’ve scrounged together from races and teams thousands of miles away that somehow made their way to the small island nation of Cuba.

This kind of dedication to sport doesn’t come without a degree of resiliency and a desire to compete that should be admired and respected. While we split hairs over ounces and seconds, they push for the same ability to compete at a level that allows them to realize their fullest potential.

Likewise, it’s the unparalleled resourcefulness of riders, their teams, and their mechanics that allows the elite cyclists of Cuba to remain dedicated to their sport. There’s no shortage of examples to prove it. Simple incompatibilities that would send one of us to the local bike shop (or bike forum, or eBay, or Pinkbike, or Kijiji) just means a little problem solving for the mechanics in Cuba. 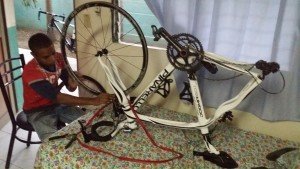 They’re clever and they make do with what they’ve got.  A Campagnolo chain can be made to work with a Shimano crank.  A Shimano 11-speed cassette can be fit to a 10-speed freehub body with a grinder and some hardware.  Things are just different, for instance, for almost every rider in North America, a pinch flat on a tube means a $6.99 trip to the shop and a used tube you’ll never see again. For a rider training in Cuba it means a patch and 3 more months on that same tube.

Whether its cycling, triathlon, soccer, running, or any other sport, its important to remember what impassions us to complete, and recognize that the opportunity to competition in sport can be can be afforded to athletes in other parts of the world with a little help from us.

Willy kindly asked me to talk to a few of the guys at Ridleys about setting aside things like broken chains, spare tubes, used cassettes, and the like for him to bring down to Cuba in February when he goes to race the Vuelta. “Nothing new” he stressed, they can make due with a little bit of our extra kit and gear. They don’t ask for much, and I figure they’ll use a little bit of grit to make the difference.

Likewise, I’d implore you to look for opportunities to share what you might not use anymore with athletes in parts of the world that aren’t quite as fortunate as us.  Whether its a trip to Mexico, Cuba, Africa, anywhere, there are always athletes looking to compete and its important to think of ways that we can give them a hand up.  It may be as simple as bringing some of your old used sports equipment on your next vacation and asking some of the hotel staff if there’s a way it could be put to use, or sending a care package with friends to their next destination race.

Organizations like Right To Play International also do an amazing job of using play to educate and empower children and youth to overcome the effects of poverty, conflict and disease in disadvantaged communities.  I’d encourage you to learn more about them and take some time to figure out how you can help.