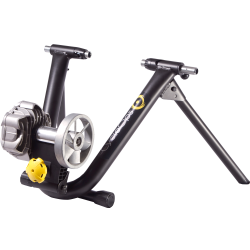 My pick of the mill. The CycleOps Fluid2 Trainer.

All about bike trainers for your months of winter riding.

Welcome to winter.  For a lot of folks in Canada and the northern states of the US, riding outdoors and getting in intense training sessions outdoors simply isn’t an option.  But an old adage in racing goes, “Winners are made in January, not June”.  So in order to get some good miles and some intense workout sessions in, the trainer is the only option if you’d like to keep in the comfort of your own home.

Come winter, the newcomer cyclist questions of “what type of bike should I buy?” gets replaced with “what sort of trainer should I buy?”.  Its important to find the right trainer that fits your budget, provides the resistance you need, and will stand the test of time.  So here’s a quick roundup of the basics for trainers meant to help guide the uninitiated.

There are actually quite a few other types of trainers out there now such as the LeMond Revolution, but I’m going to stick to the run of the mill, basic vanilla types of trainers where you mount your rear wheel to a flywheel to produce resistance when you pedal.

Essentially there are three main types

What fits the budget

I recognize that most people actually shop for this stuff by budget, especially in the offseason while you’re saving up for a new cyclocross bike, or the latest Garmin toy.  So here are my picks based on price range

You can shop around for trainers on the internet, but I’ll caution you.  Trainers are heavy and bulky, and every dime you save on the MSRP by getting it off ebay, you’ll lose on shipping and brokerage.  So hit up your local bike shop, try them out, and show a little love to the local guys.

A couple times a week on the trainer, even for sessions under an hour or so, are a great way to maintain fitness through the winter.  If you’re looking for some programs to push you through your workouts because you’re all caught up on The Walking Dead or House of Cards, definitely checkout The Sufferfest series of videos… if you dare.