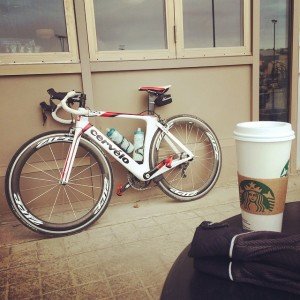 The Cervelo S5 is a no compromise aero road bike from the bike manufacturer that essentially pioneered the concept of aero road bikes.  In essence, the S5 is a time trial bike equipped with drop bars.  When the bike was initially designed, Cervelo’s engineers borrowed heavily from Cervelo’s then top end time trial bike, the P4.  Since Cervelo introduced the S5 a few years ago, several other bike manufacturers have come to the table with top notch offerings like the Specialized Venge, and Giant Propel.

I rode the Cervelo S5 for a few years with it as my prime road bike for both training and racing. My S5 actually pre-dates this blog so I never really got around to reviewing it or providing insights on the ride quality and features of the bike.  With that in mind, I thought I’d put together a very long term ride review for the Cervelo S5.  A quick Google search will yield plenty of results around the specifics characteristics of the bike, but having ridden the bike for so long, I’m going to go with a different review format and talk about my different experiences with the bike.

As a side note, the specific model being reviewed is the 2012 Cervelo S5 Rival.  Which was the base model frame available at the time.  Since that time, Cervelo has narrowed the S5 lineup to just one single higher end frame.  As far as overall frame design however, the bike has only undergone a few minor changes over the years.

I’d go so far as to say that the Cervelo S5 is a crossbreed between a TT bike and a road bike.  At more than one triathlon I’ve seen S5’s retrofitted as a TT bike, with a proper aero cockpit.  On that basis, the Cervelo S5 is a solid performer on the open road and one that I’d recommend for breakaway specialists, or cyclists who are looking for one bike to ride for both time trials or triathlons and in road races.

One of the drawbacks to aero bikes however are how they perform in moderate to heavy crosswinds.  I rode the S5 with Zipp 404 wheels and live/ride in a region where crosswinds can be very strong and gusts can push you all over the road.  At higher speeds the yaw angle of winds are reduced, but occasionally even at higher speeds heavy gusts (greater than 50kph or 30 mph) or air turbulence left behind large or passing trucks, caused a little bit of a safety issue.

If you’re a triathlete and see yourself doing a lot of solo training rides, or consider yourself to be a peloton escape artist, the S5 is a great choice.  Having ridden back to back rides with my old Cervelo P2 and my S5, at the same wattage, on the same course, the bikes performed strikingly similar.  That being said, I can’t account for extraneous variables like wind or temperature, but just know that if you’re riding 30kph on your TT rig, you’re not going to see a huge penalty switching to your road bike if its an S5.

This is where the bike puts on a bit of a Jekyll and Hyde show.  To make the bike so slippery in the wind, the bike has a very narrow headtube, in and of itself, thats not an issue as Cervelo uses its proprietary BBRight bottom brackets to keep the power transfer to the pedals stiff, but coupled with the added weight of an aero bike (which isn’t THAT much mind you), the bike isn’t the greatest climber.  There’s a reason that when you flip on the Tour de France you don’t see riders climbing out of their saddles on aero road bikes.

Cervelo is up front about this and thats why they’ve got phenomenal traditional road bikes like the Cervelo RCA, and R3.  Aero road bikes make for solid all rounder bikes, but they really don’t stack up well against lighter or more traditional frames.  If you’re riding S5, you’re also probably putting some deep dish hoops on it, like Zipps or Reynolds, which tend to add a little weight as well.  On climbs and attacks, the S5 simply lacks the snap and finesse that you’ll find with bikes like Trek’s wicked new Emonda, or the Cannondale SuperSix EVO.

But there’s two sides to that coin.  The S5 is a very fast descender.  Last summer I rode a pretty hilly road race here in the Alberta Rockies, in Canmore.  The race was a two loop out and back with climbs on each end of the lap.  Not huge climbs, but enough to thin out the group.  I constantly found myself moving back in the group on the climbs.  A lot of that may have had to do with the engine (and the hangover I was sporting as the race was the last day of the Calgary Stampede).  However, at the turnaround where we began our descent, the S5 would just slide up through the group and I’d be spun out and coasting as I made my way back through the group.

A lot more of the aero profile of a bike/cyclist comes from the cyclist, and this is a pretty anecdotal n=1 evaluation, but the S5 is a very fast and very confident descender and the ultra aero approach to the frame design really is a difference maker on the descents.

If you’ve got an S5 and race in a hilly region, take a page from the pro sprinters books.  Move up to the front of the peloton before the climb starts, and move back through the group and save energy during the climb, and play catch up on the descents. 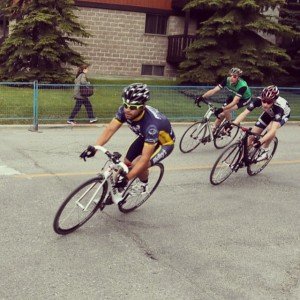 The Cervelo S5 performs similar to any other bike in road rides.  In the peloton, the bike loses a lot of its aero advantage and outside of the most technical road race courses, you honestly aren’t going to notice much difference between the S5 and any other rig.

Where the bike shows its true colours though would be in crits.  And honestly I wasn’t the biggest fan of the bike when I was crit racing.  On a 51cm frame you won’t have to deal with toe overlap or anything like that, but the bike has a nasty tendency to understeer in tight corners.  Its actually a pretty big deal in crit racing.

In crit racing you’ll be hanging on to another rider’s wheel going into the corners, and as you approach the apex of the turn you stop pedalling and let that take off the necessary velocity to allow you to negotiate the corner.  I could never put my finger on it exactly, but the problem with the S5 is either that it carries too much speed through the corner, or it simply isn’t very confidence inspiring when you’re leaning through the apex.  The result, is that coming out of the corners you’ll start to run wider than other riders, and to counter this, your only option is to touch the breaks as you exit the turn, or bleed off more speed as you approach the turn.  Neither of those options are particularly appealing in a crit race.

The Cervelo S5 simply isn’t a super maneuverable bike in corners and crits.  That of course is the byproduct of the bike’s TT geometry and pedigree.  Like I said before, this bike is made to be out front of the group, maybe not in the thick of it.

As you can see, the Cervelo S5 draws a lot of its strengths from characteristics that can cause challenges in other contexts.  The S5 is an unmistakably fast bike and one that I’d recommend to anyone who sees aero as the way to go.  Its popular among triathletes, and for good reason, its a TT bike dressed in road bike clothes.

My biggest issue with the Cervelo S5 today though, is the price point.  If you wanted to go out and pick one up from your local bike shop today, you’re going to have to shell out $6100 for the S5 equipped with 11 speed Ultegra and almost $11,000 for the S5 with Dura Ace Di2.  The Giant Propel Advanced 1 is just $2649 equipped with the same Ultegra componentry, and just $2099 with 105 components.  That being said, the pro level Propel Advanced SL with Dura Ace Di2 does come close to the top level S5 at $10,500.

When you compare the Propel and the S5, the data on which bike is quicker comes down to whose marketing data you’re willing to believe.  But without you’re own wind tunnel, you’ll probably just have to call that competition too close to call.  Meaning that on price, point, the S5 just doesn’t come close to the Propel.

So, take that as you will.  I honestly am not familiar enough with the Specialized Venge to make a real confident comparison with that, but thats another option as well that you can get your hands on for less than the S5.  Or you can even wait for the next gen Madone and see what the brilliant engineers in Waterloo, WI, have in the works.

In summary, I love the S5, its a brilliant and fast bike, but the price is just a challenge for me these days.