Last week I was in Las Vegas and had the opportunity to take a brand new 2015 Cervelo S3 out for a 90km ride through the rolling and undulating terrain of the Nevada desert.  I was out with Eric from Las Vegas’s Pro Cyclery who I rode with for the day.  The entire crew at that shop is phenomenal and if you’re ever in the area I strongly encourage you to pay them a visit and get out for a ride on the roads or in the mountains.  The ride took me through rapid winding descents, long climbs, some of the best pavement I’ve ever ridden, and some of the worst pavement I’ve ever ridden.

If you don’t know much about it, the S3 was the bike ridden by Thor Hushovd at the World Road Race Championships in 2010 and has a long history as a thoroughbred racer and a product of Cervelo’s aerodynamic pedigree.  The model took a brief hiatus after Cervelo introduced the aero-or-bust S5, but brought it back a year ago, much to the delight of solo breakaway artists and sprinters alike.

I’ll share a few of my thoughts on the bike with you all here.  For the record, I do ride a Cervelo S5 as my main road rig, but have a few other bikes that I currently and formerly owned to reference against. 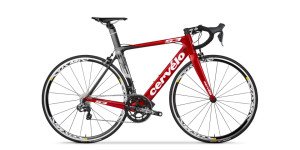 If you take a look at the bike you’ll notice a few key things.  First and foremost, the bike makes full use of the aerodynamic approach to bike building that has become Cervelo’s core competency.  The aero fork, head tube, downtube, seat tube, and seat post would be the envy of many time trial bikes.  Cervelo states that the S3’s slippery profile picks up a lot of its cues from the P5 and S5.

Cervelo acknowledges that the S5 still maintains a marginal edge over the S3 in terms of aerodynamics, but just by a paltry four watts.  Comparing the two side by side you’ll see that the S5 is essentially a TT bike with road bars, while the S3 looks more like a road bike TT elements.

Where the S3 really differentiates from the S5 however is with the ultra thin seat stays that borrow from the Cervelo RCA, which is Cervelo’s pro-tour road frame.  This makes a huge difference in terms of compliance over the S5.

You can ride over something written in brail and read it letter for letter with the amount of vibration and feedback the S5 transmits through the frame and its inch wide seat stays.  This can definitely lead to rider fatigue on rough roads surfaced with compounds like chipseal.  This is in stark contrast to the RCA and Paris-Roubaix bred RS, which literally make you wonder about your tire pressure when you first ride them thanks to the amount of vertical compliance they provide.  Given the choice between the two for longer rides on varying surfaces, the S3 has the advantage over the S5 by borrowing from the RCA and RS.

What I like about the S3 is that they put aero up front where it matters, while keeping the bike stiff and compliant through the rear triangle where turbulent airflow minimizes the aero penalty with minimized conventional tube shapes.

On the topic of stiffness, according to Cervelo, the S3 is 23 percent stiffer in torsion at the head tube and 19 percent stiffer at the bottom bracket than the S5.  I can’t honestly say that I’ve ever had complaints about the S5 in terms of stiffness and power to the road, but on some of the short punchy climbs and quick sprints I did feel a more direct power transfer to the pedals.  But that can always be placebo effect. 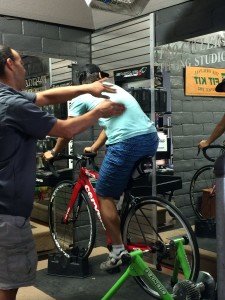 Quick fitting with Eric on the S3 at Pro Cyclery

The S3 I rode was outfitted with the standard componentry that comes on the Ultegra version of the bike.  That is, 11 speed Ultegra 6800 with a Rotor 52/36 crank, and Mavic Cosmic Elite S wheels.

I really liked the 11 speed Ultegra groupset.  I’ve been riding 11 speed 105 on my cyclocross bike for a few months now and the step up to Ultegra gave a slightly more solid shift feel that’s more mechanical than the 105 set, which feels a bit smoother and more buttery.  Between the two, it’s sort of a personal preference thing whether you like more fluid feeling shifts, or more mechanical feeling shifts.

Another step forward for Shimano with the Ultegra 6800 is the inclusion of a trim feature for shifting which allows you to ride a wider range of gears on the rear cassette without the noisy feedback of cross chaining.  This feature has been around with SRAM for a little while now and straight out of the gate Shimano’s Di2 components had features to address this, so its good to see the mechanical Ultegra catch up with this feature.

I wasn’t a huge fan of the Rotor crank simply because its so noisy.  One of my biggest gripes with Cervelo has always been that they always go a different way than the groupset with the crank.  While Rotor is an improvement over the FSA Gossamers that they used to spec, I’d rather see them go with cranks that match the rest of the group, the way that Trek has done.  I suspect Cervelo does this because of their BBRight bottom backets, but I still don’t like it.

I did prefer the gearing of the crank however, the intermediate compact 52/36 gearing was a welcome change versus 50/34’s that come standard on many road bikes these days.

Lastly, no complaints with the Mavic Cosmic Elite S.  Without tires these hoops tip the scales at 1770 grams.  So while they aren’t featherweights, they’re great training or crit rims.

I loved the way the S3 felt, handling was quick and slightly more responsive than the S5.  I felt especially confident on some great winding descents, and never had any issues with understeer that you can sometimes get when you really lean into the corners.

Power transfer was direct, and stiffness in the bottom bracket area made acceleration and out of the saddle efforts feel solid.

Finally, along the route we had some issues with torn up pavement.  About 30 miles of torn up pavement in fact.  Myself and the other riders I was with had no idea why on earth the Nevada State Parks Department would rip up mile upon mile of pristine asphalt, but it turned a big part of our route into brutal Roubaix rough road.  The S3 definitely isn’t a Roubaix bike but most of the fatigue and vibration came through the front of the bike, rather than the rear, which was slightly more compliant.  Take that for what its worth.  Know that if you decide to ride for 30 miles on garbage roads your bike won’t break and you won’t die. 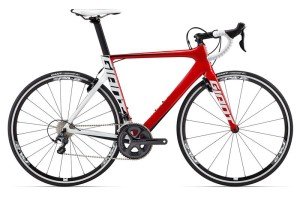 If there’s one thing that I’m not in love with, it’s the price.  Cervelo has moved a little upwards in terms of pricing over the past couple years and at $4350 CAD, today’s S3 is about $500 more than what I bought my S5 at in 2012.  Granted my S5 was originally sold with SRAM Rival, but it’s still a lot of dough to shell out.  Even today’s S5 costs a jaw dropping $6100 CAD, meaning the price increases are way more than inflation and I don’t know that the improvements to the bikes over the years can account for that much of a price increase.

Giant will get you into aero road bike territory for $2649 CAD with the Propel Advanced 1, fully kitted with Ultegra components and leaving you with $1700 for toys like Garmin Vector Pedals or Zipp 404 wheels.  Or if you want to go the way of the weight weenie, $3600 CAD will put you on Trek’s Emonda SL6 which is a 16lb climber, also with full Ultegra.  While I haven’t had the chance to rider either of those bikes, I know a lot of shop guys who are all over those two models.

With the S3 you definitely get a lot of bike but at the price point, you should definitely be shopping around.

If I had to summarize my thoughts on it, the S3 is the perfect bike for crit racing that you can take out on club rides for the weekend.  It handles great and transfers power to the road really well in the sprints.  In addition, of course the aero profile of the bike will make it great on long descents or solo breaks.

Post Script:  It occurred to me shortly after I wrote this that the noisy Rotor crank is a safety feature implemented by Cervelo.  The S3 is a crazy fast bike, so Cervelo wanted to make sure people would hear you coming as you come up to pass them.